Although I've done lots of different things since moving to Singapore last July, some of what might be seen as the essential Singapore experiences are so far lacking from my blog.  This is mainly because when I came to Singapore on an initial two week holiday I did a lot of them then as many tourists do.  At the time I wasn't writing my blog and I've not thought about writing about them since I have been.  However I do intend to gradually put that right and I'm going to begin with possibly the most famous building in Singapore and certainly an icon of it, the Raffles hotel.﻿ 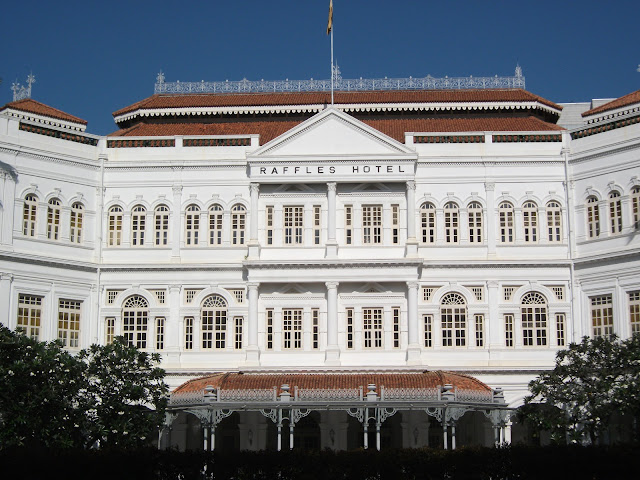 I have mentioned Raffles in previous posts but I've never actually written about the place and of course the ultimate must do when there, a Singapore Sling in the Long Bar.  Before I went although I'd heard of Singapore Sling's I didn't actually know what was in it.  I know now that it contains amongst other ingredients, gin, benedictine, pineapple and cherry liqueur, is bright pink in colour and was originally designed as a drink for ladies.  It was invented by a bartender at the Long Bar called Ngiam Tong Boon in the early 1900's.

Despite being fairly sweet it is very nice and very drinkable, although as many of you will know they don't actually mix the Slings at Raffles as you ask for them rather they are premixed beforehand.  The only time they do mix them for you is if you ask for a Sling with a specific gin but those versions are more expensive than the already expensive traditional version.  Having tried a number of Slings in various locations I actually prefer the Slings from the Post Bar in the Fullerton Hotel and they do actually mix them for you there, but that's just my preference.  The other thing you can do in the Long Bar is munch on peanuts and throw the empty shells on the floor.  It may feel weird to do but it is perfectly acceptable here and even if you leave them neatly on the table the bartender's will come along and brush them on the floor once you leave.

I should say as well that they do nice bar snacks in the Long Bar, the satay sticks and the mini slider burgers being particularly tasty.

Away from the Long Bar there are other bars accessible to non-residents including the Bar and Billiard Room, here you can sit out on the veranda and enjoy a barmy evening sipping whatever tipple you prefer.  The Long Bar is a definite tourist pull and whenever I've been there everyone you look at is sipping on the famous pink cocktail.  However the Bar and Billiard Room does not appear as popular with the tourists and in contrast seems a little more relaxed.  You can also sit out in the bar in the courtyard as in my photo below, again nice to do as a change from the busy Long Bar. 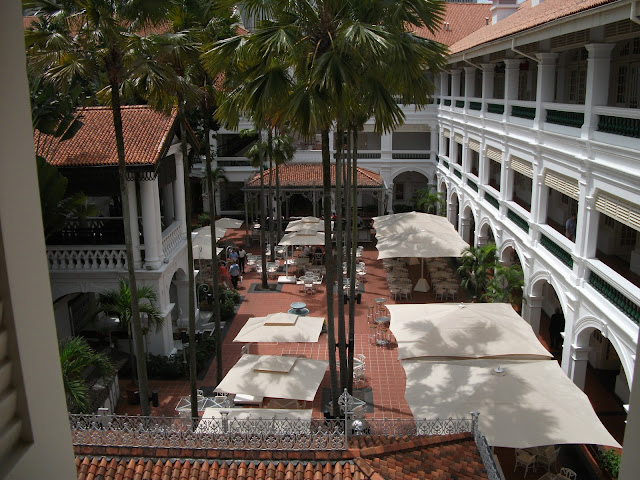 Raffles Hotel is a beautifully colonial looking building, lovely to wander around and soak up the atmosphere and like all hotels in Singapore seem too has an arcade of shops attached to it.  However given this is Raffles the shops seem to be suitably fitting with amongst other things a Tiffany's and a Jim Thompson silk shop. 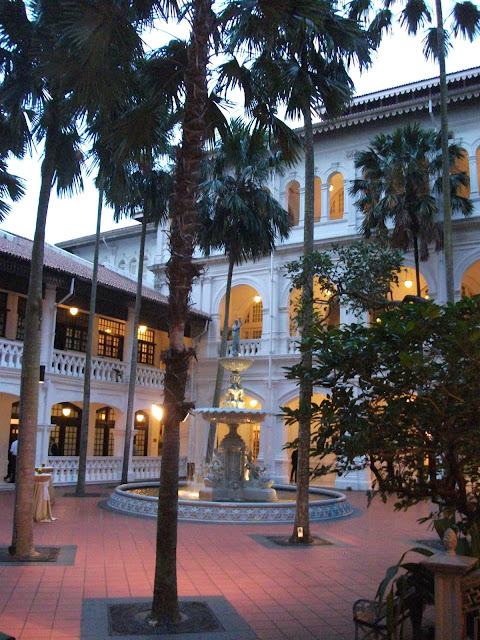 Another thing I would suggest is worth doing on a visit to Raffles is to have a look in the hotel's museum (sadly this is now closed).  It's only three rooms of exhibits but is free and is basically a collection of items from the hotel's history.  A lot of these are items that previous guests 'acquired' on their own visits to the hotels and fabulous photos of parties and guests enjoying the hotel's facilities from a bygone era in Singapore's history.  There is also the scribbled down note of the original recipe for the Singapore Sling alongside a photo of the bartender who invented it.

Of course the hotel has a shop and for all the, as to be expected, expensive souvenirs that can be purchased there are also items that won't break the bank and will make for a nice memento of your visit.  Despite the Long Bar being a real tourist hub I still think Raffles is definitely worth a trip.  How can you say you've been to Singapore if you haven't been there after all?