Hanoi - a Mausoleum, a Palace and a Museum

After our flying visit to the UK to see family and our couple of day trips to Lancaster and Bodiam castles whilst there, we returned to Singapore for just one night before jetting off to Vietnam for the week. This was my first visit and my husband had only been there for work previously so we were both very excited! The trip began with us flying to Hanoi for a couple of days.

Our base for our stay there was the Metropole hotel, an amazing old Colonial style hotel right up there in the league of the grand old hotels of Asia, a place for stepping back in history. We were truly spoilt for our few days there enjoying everything that a good hotel has to offer. Certainly somewhere I'd recommend if you are planning a visit.

The first place on our visit list was to Ho Chi Minh's mausoleum complex. We initially didn't intend to go inside the mausoleum and view the body of Ho Chi Minh but we quickly realised we couldn't get to the other parts without doing just that. The first part of the complex taking you to the mausoleum was quite heavily patrolled by guards and we didn't fancy trying to drop out of the queue once we'd joined it. So we stayed in the queue, which thankfully was moving at a steady pace, filed around the grounds and eventually entered into the mausoleum.


The mausoleum was constructed between 1973 and 1975 and stands in the centre of Ba Dinh Square, this was where Ho Chi Minh read the Proclamation of Independence in 1945 leading to the independence of Vietnam. The building was inspired by Lenin's mausoleum in Moscow and I have to say isn't the most beautiful building I've ever seen. It apparently also goes against Ho Chi Minh's last will request which was to be cremated. If you want to visit there are strict rules about clothing and and the use of mobiles, taking of photography etc. Be prepared to hand your camera in (if you have a larger one) you get a ticket to collect it on the other side, dress conservatively and maintain respect whilst you are inside the mausoleum. This was my first experience of seeing an embalmed body, I didn't really know what to expect but I wasn't blown away by the visit if I'm honest. You file into the mausoleum in a line and walk around the glass case where he is lying. His body is heavily guarded, there's no time really to stop (not that you can take photos or anything) and then before you know it you are outside again.

As soon as you leave here the military presence lessens and you have more freedom to walk where you want to. Here too you can also take photos of the outside of the mausoleum. From there we went to see the Presidential Palace, a beautiful building built between 1900 and 1906, originally to house the French Governor-General of Indochina. The building has an unsurprisingly European look to it and with the sun shining on it the day we visited looked truly lovely. Ho Chi Minh refused to live there when independence was achieved in 1954, instead eventually opting to live in a stilt house which is also in the grounds. Non-Vietnamese visitors have to pay to enter the grounds where the palace and other buildings are but unfortunately you can't really get a lot closer to the palace than in my photo below. You also can't go into the palace which I thought was a pity but it is now used for Government meetings so that is the reason why, but still a bit of a shame.

From viewing the palace you can then go and view a garage where Ho Chi Minh's various cars are displayed. Although Ho Chi Minh didn't live in the Presidential Palace he did live firstly in the former electrician's quarters behind the building. Here, through some glass panelling in the building, again you can't go in, you can get a glimpse of the simple style that Ho Chi Minh chose to live in whilst living and working there from 1954 to 1958.

The path that leads from the palace around the carp pond in my photo below to the stilt house is known as 'mango alley' due to the numerous mango trees here. The stilt house is claimed to have housed Ho Chi Minh from 1958 until his death in 1969. The design of the stilt house is based upon traditional houses from the Vietnamese north west. It is said this reminded him of the houses he took refuge in from the French whilst still a revolutionary. The stilt house is pretty small and only has two rooms in it with no bathroom and again is very simple in its decor with only a few personal items of Ho Chi Minh's there. 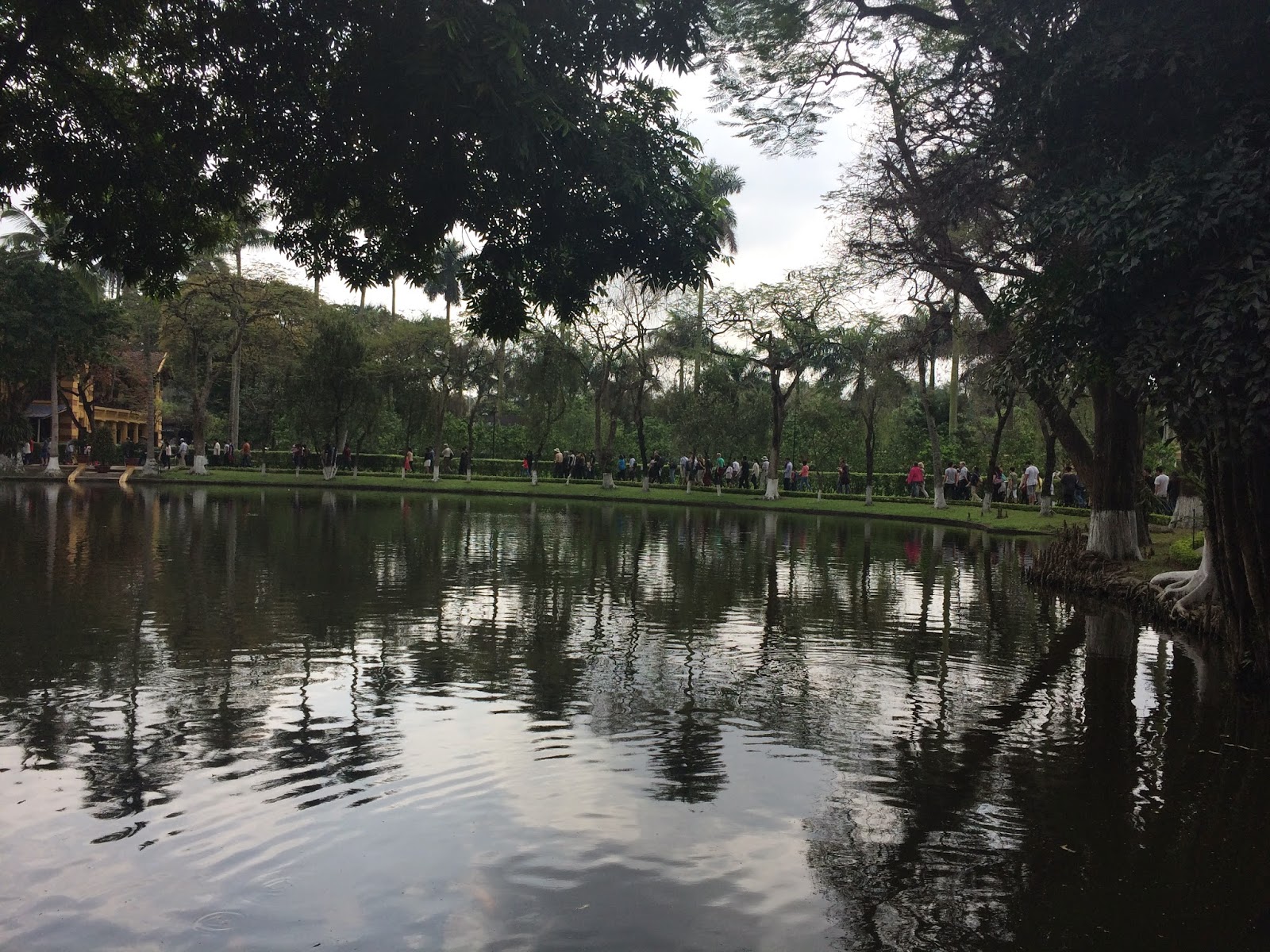 From here we passed the One Pillar Pagoda, a Buddhist temple regarded as one of Vietnam's most iconic temples. This was built by Emperor Ly Thai Tong who reigned from 1028 - 1054. It was designed to represent a lotus blossom, a symbol of purity, rising out of a sea of sorrow. 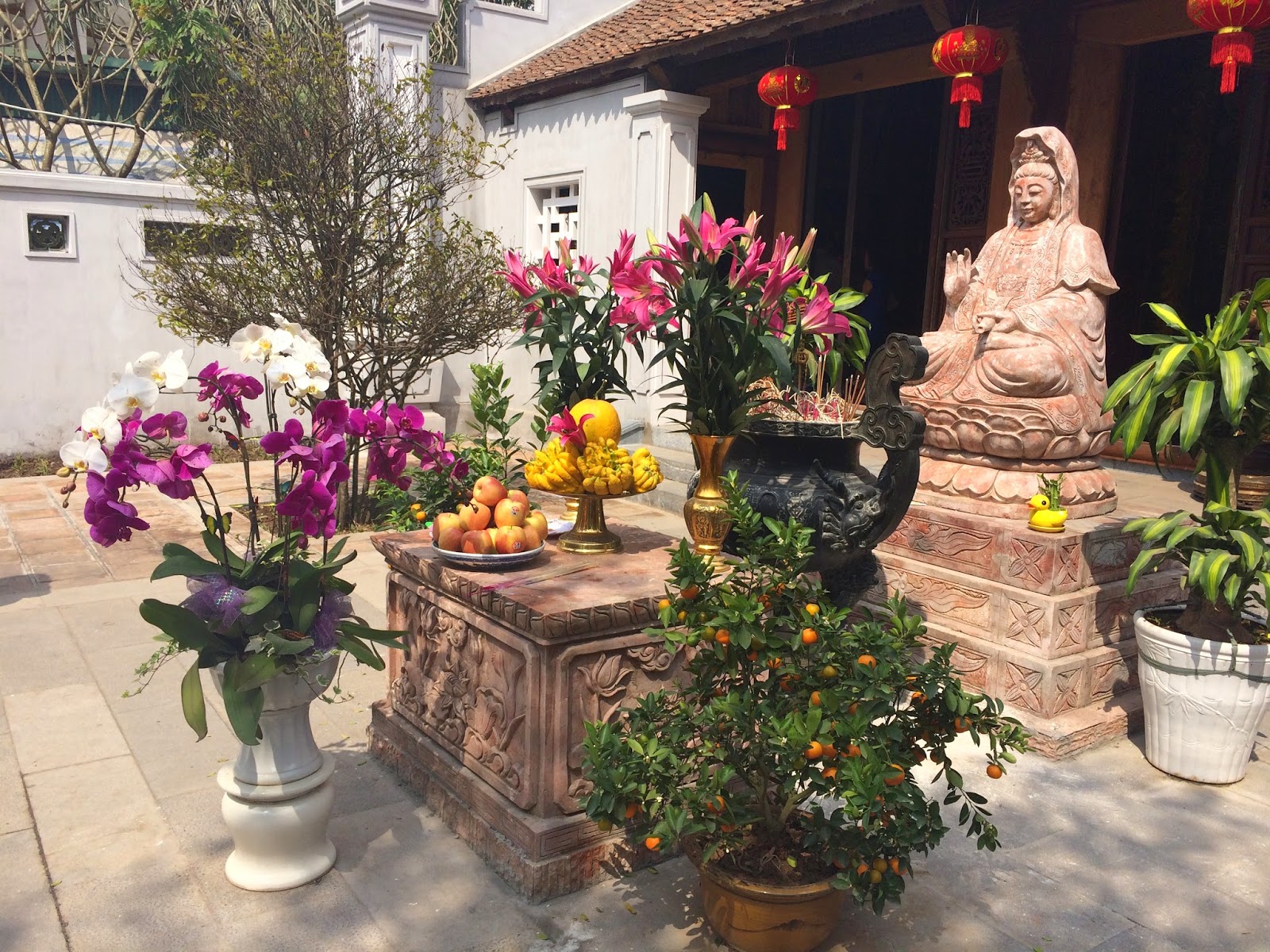 As you are leaving the mausoleum complex you approach the Ho Chi Minh museum. So we decided to end our visit to this part of Hanoi by taking a look in there. The museum is divided into various sections, including one about Ho Chi Minh and another about Vietnam's struggles and victories. Whilst there is information in English to read I admit that some parts of the exhibits and the symbolism contained within them were a little hard to follow and make sense of. I guess you probably need a greater understanding of Vietnam's history then I possess to fully make sense of it all.

After our busy and interesting morning we decided we needed to eat so headed off to find something. On the way we passed the Flag Tower in my photo below which was built in 1812. This was part of the Hanoi Citadel, the former residence of Vietnamese monarchs, much of this was destroyed in the late 19th Century but a few parts such as this tower remain.

We'd barely scratched the surface of Hanoi on our first day there but it was a great start to our holiday. I couldn't wait to see more!

If you want to read more about our visit to Hanoi, check out my husband's post about some of the delicious food we had here and my post on the rest of our time in Hanoi, here.