We've recently returned from a flying visit back to the UK. Whilst that time was primarily spent with our families we managed to fit in a couple of day trips out, the first of which was to Lancaster castle.

As you'll know the UK at this time of year certainly isn't as warm as Singapore and the day we visited Lancaster castle was no exception. It was bracing to say the least and warm drinks at the end of our visit were very welcome! My photos are deceptive there was definitely a keen breeze that day.


I knew nothing about Lancaster Castle before our visit and had no idea it was quite unique in that it was being used as a prison up until March 2011 and part of the building is still used as a Crown Court. In fact on the day we visited there was a sitting in progress so we were not able to view all of the building. As it is still used as a court this also means you are restricted on photo taking in some parts too, regardless of whether the court is in session or not.

The early history of the castle is not clear but it is believed it was founded in the 11th century on the site of a Roman fort. In 1164 the Honour of Lancaster (basically a large estate) which included the castle came under Royal control and it was first used as a prison in 1196 with its role as such becoming far more important after the English Civil War and continuing after that. 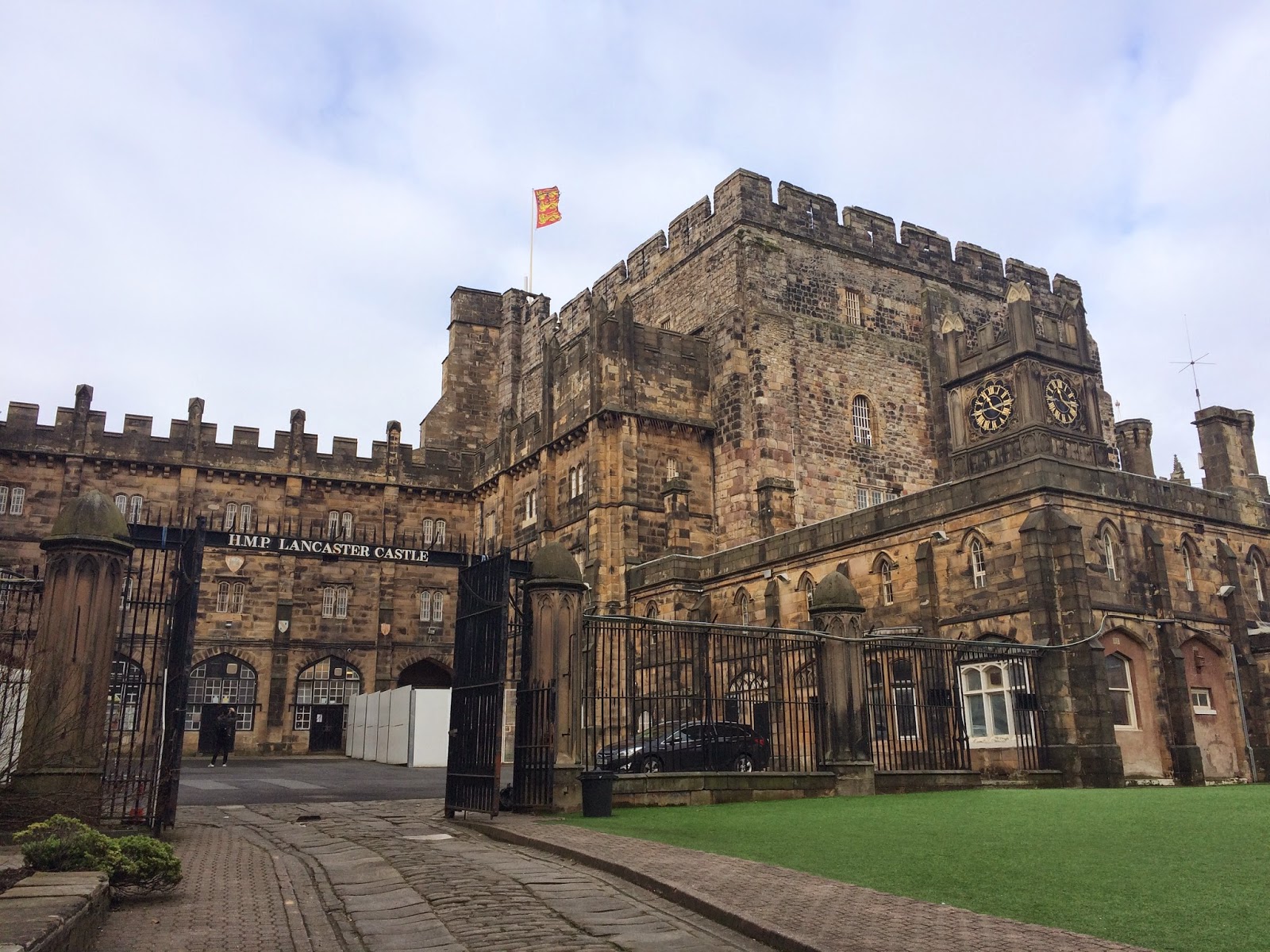 Entering through the Gatehouse you are faced with the view in my photo above. Quite a daunting site I imagine if you had been sent here as a prisoner. Before we entered the building our guide gave us a bit of an overview of the history of the castle and pointed out the Well Tower or Witches Tower (in my photo below). We weren't able to enter this building but this was where the Pendle witches were held whilst awaiting trial here in 1612. In case you haven't heard of them the witches lived during the reign of Elizabeth I (1558 - 1603) and James I (1603 - 1625). James I had a strong belief in witchcraft and passed an Act imposing the death penalty on any one accused of it. The Pendle witches were two families (from Pendle) headed by two elderly widows, several of who were accused of being involved in witchcraft. The trial took place in August 1612, ten people were found guilty, sentenced to death and subsequently hanged on a moor near Lancaster.

After our introduction the tour began by us entering the door right besides the white cordoned off area you can see through the gates in the photo above. If you want to visit yourself please note that you have to join a guided tour, due to parts still being a working court. Inside here we were not permitted to take any photographs but this area was the prison laundry when it was last in use. Being such an old building it seemed pretty spartan inside, though, of course, bar a few signs indicating what it was previously used for it is now just a largely open room.

We were taken to view the room that now houses the jury when they sit to make their decisions. From this room you can see the 'hanging corner' where, as the name suggests, executions took place up until 1865. We were told that only a handful of executions were for murder with many more being for other crimes such as burglary and robbery. Our guide explained that after the execution the bodies could not be buried in the local church yard so many were buried in the ground directly beneath the hanging corner which is now a car park. Quite a chilling thought. We were also taken to what is known as the Drop Room where we could see relics of many executions and the types of implements that were used to restrain and punish prisoners.

As we came back down from these rooms to leave this part of the castle we were shown some of the original prison cells. These cells were rediscovered in 1931 and the thick oak doors on them have been dated back to the 16th century. You can enter the cells on the tour (including one with no lighting) to experience how small and cramped they would have been. At the time of their use the only means of light was from a small opening above the door which could also be closed plunging the inhabitants into total darkness. One of the cells is also reportedly haunted, presumably by the ghost of a former prisoner.

The final part of the tour took us into C-Wing, the last part of the castle to still be used as a prison. As I mentioned it only closed in 2011 so this part has been left pretty much as it was prior to closure. This meant we got to see inside more modern prison cells. They still didn't look that pleasant but obviously not as dark and dingy as the very old cells we'd seen before. We also saw where the prisoners were served their meals and could look up the stairs at the floors above, but you can only look at the cells on the ground floor.

Our tour of the castle concluded here and as I mentioned it was a pretty cold day so we made a hasty retreat to the coffee shop for a warm drink. The tour was really interesting and our guide was excellent, keeping it relevant for both the adults and children in our group. If you are in the area I definitely recommend a visit.