I got back on to the Red Dot Roaming train (literally) with my first one of 2015 just recently.  This time heading to Farmway LRT (so OK not the MRT but near enough) to visit the Sengkang Riverside park and specifically the floating wetland within it.

The abundance of green spaces and parks etc. in Singapore is one of the many things I appreciate about living here.  You are never that far away from being able to go and sit or walk around one of them and during the week many of them are pretty much empty.  Many also have unusual features and Sengkang Riverside park is no exception.  When I read about the floating wetland I was intrigued and decided I needed to investigate further.

The morning I had decided to visit started off very wet and was the persistent kind of rain rather than just a passing storm.  I debated whether it was a good idea as I guessed there may not be much shelter but in the end took the plunge.  By the time I arrived there was just a very light drizzle so I'm glad I decided to go in the end.  Getting to the park is incredibly easy from Farmway LRT station, it's just a short walk and pretty much in a straight line.  Locating the wetland was also very simple, just walk past the Sengkang sports centre on Anchorvale Street and down a side path before the bridge towards the Punggol reservoir (Singapore's sixteenth reservoir) which runs through the park. 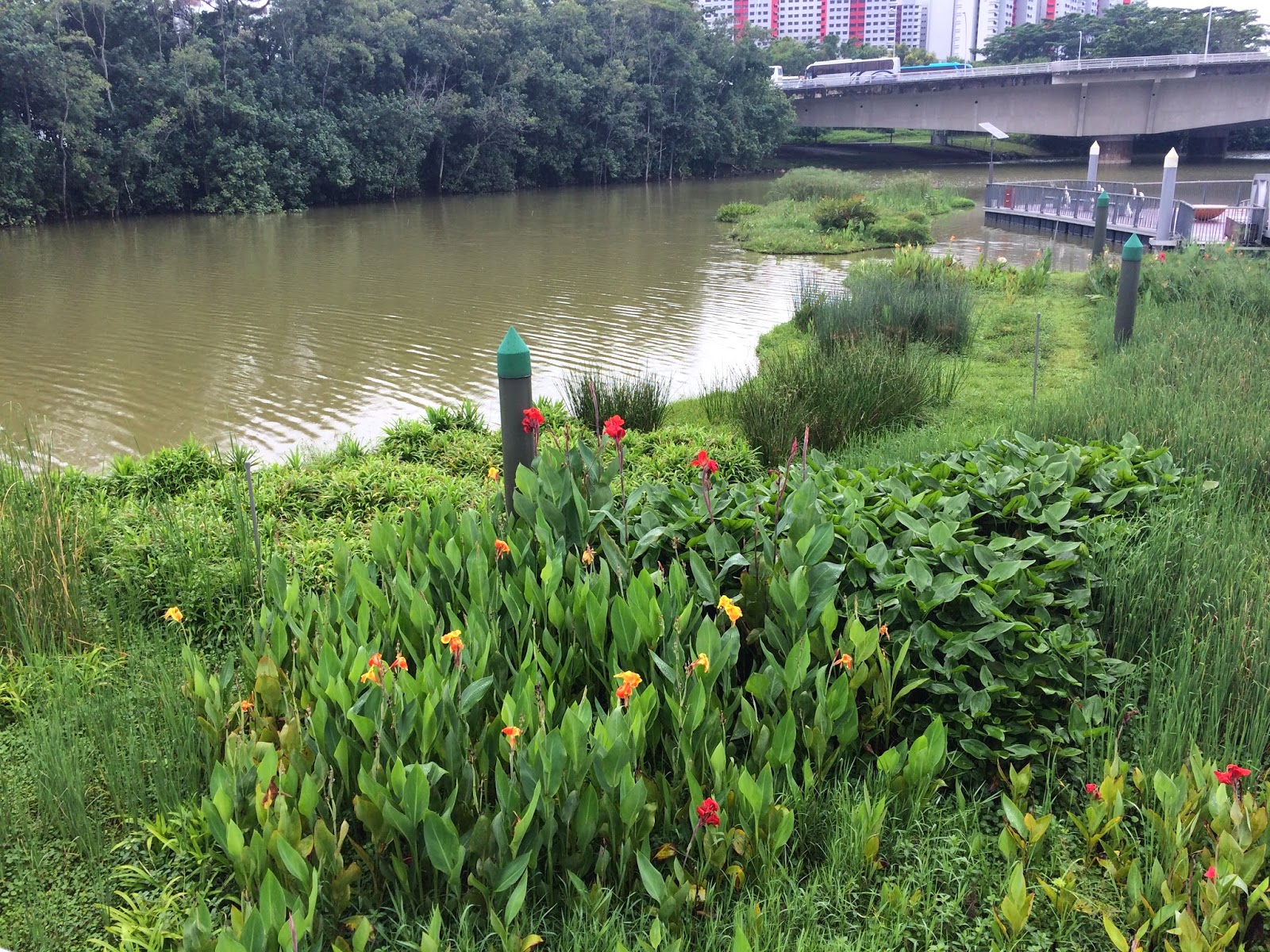 The floating wetland (a kind of large floating mat) is the first of its kind in Singapore and provides a natural habitat for a variety of fish and birds.  I didn't see any fish but I did see plenty of birds on the floating marshes.  Of course there are also a large variety of wetland plants and throughout there are helpful boards giving you information about the different plants you can see.  These include tube sedge, paper reed, dwarf papyrus, narrow-leafed cattail, water pennywort and many more. 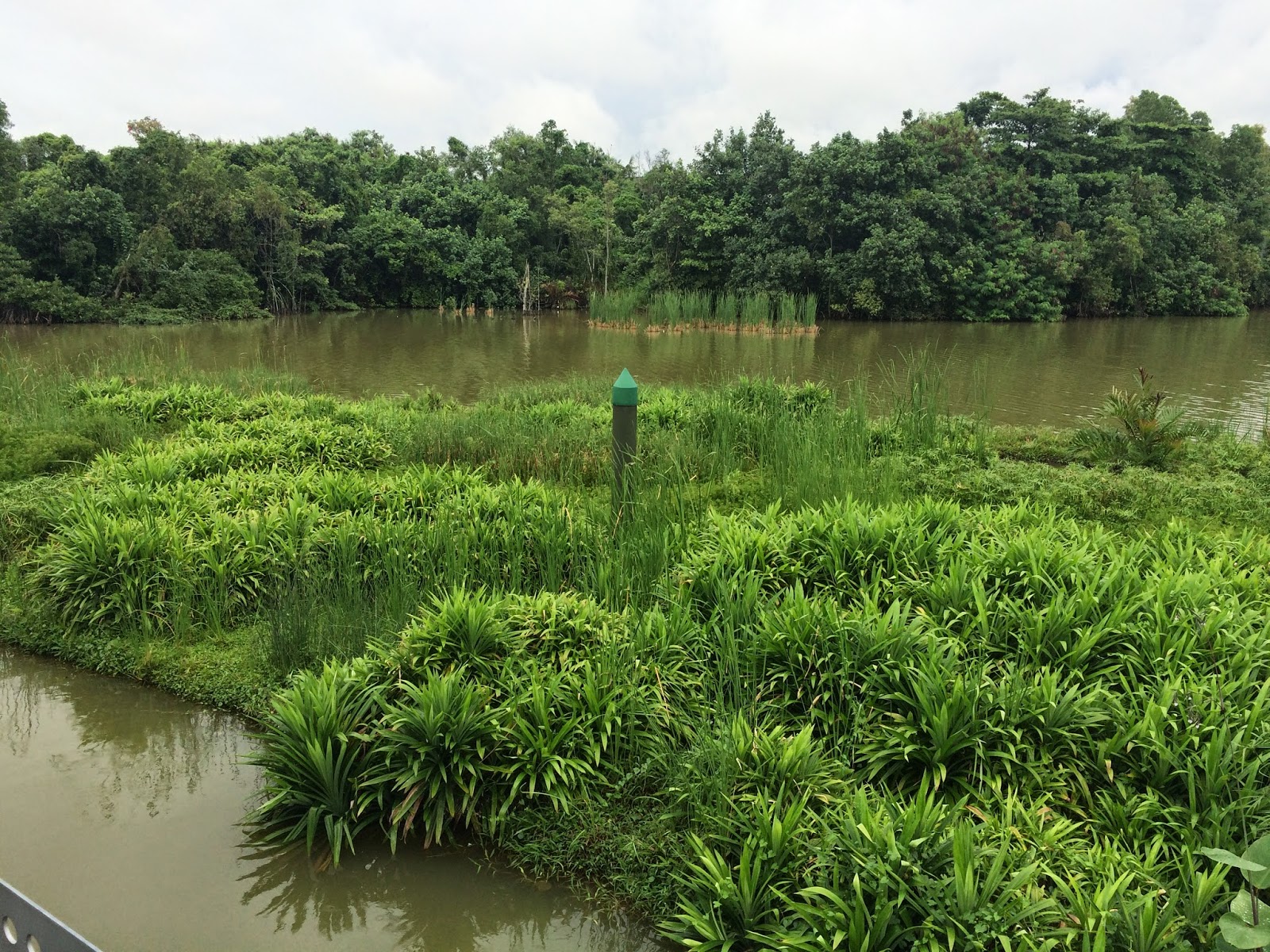 As well as being the first wetland of its kind in Singapore it also serves another important function as the wetland helps to clean the water too.  It has been specifically designed to allow micro-organisms on the plant roots to purify the water.  The micro-organisms absorb the nitrates, phosphates, ammonia and other pollutants in the water which helps to improve the water quality. 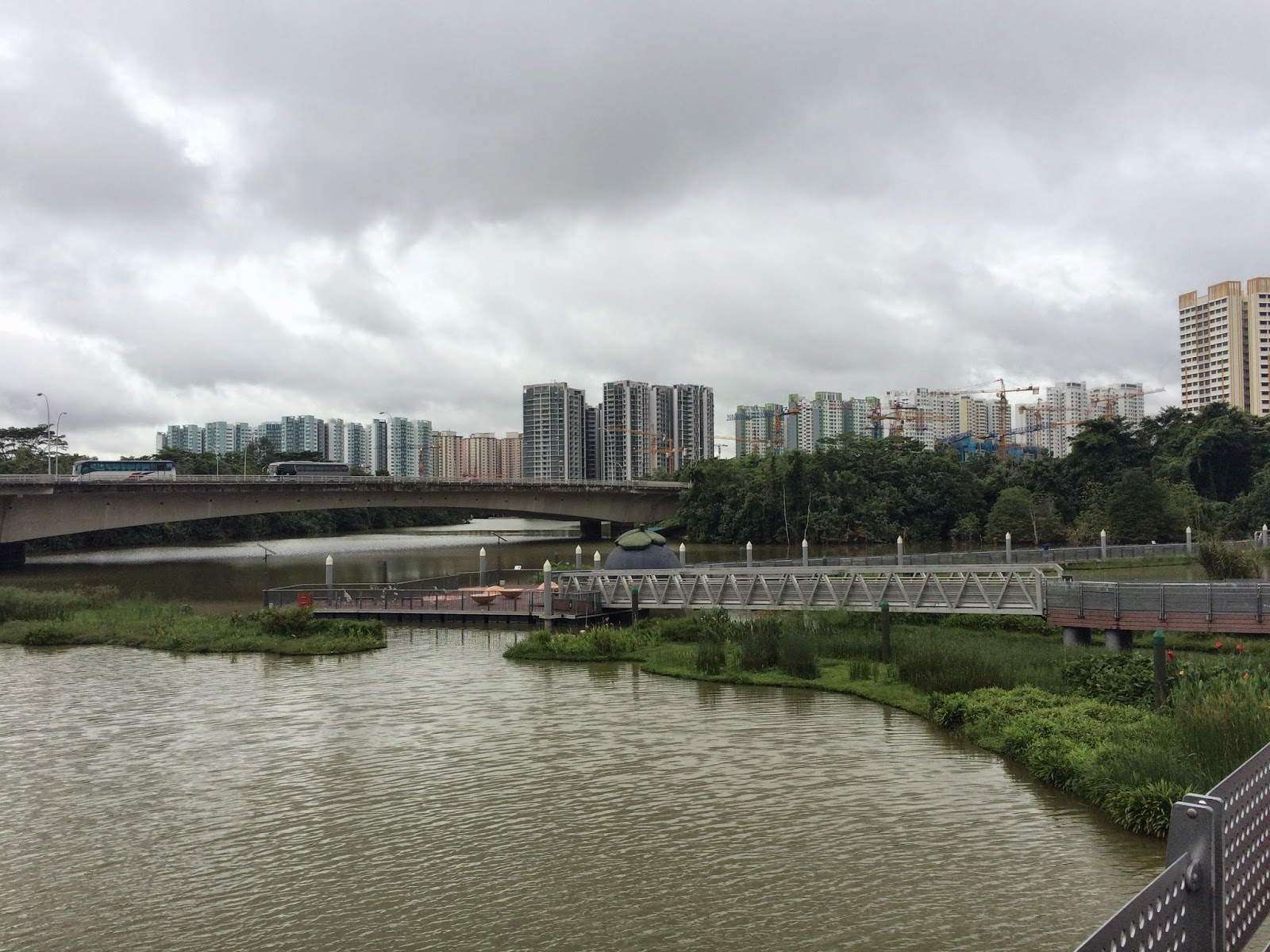 You can just seen in the photo above some decking and what looks like a giant mangosteen.  This is a bit of sheltered seating and there are also, what I think are giant oranges which also provide seating as well as more conventional seating.  At the time I was a little perplexed by why giant fruit would be chosen but I've since read about a fruit tree trail also in the park (I didn't investigate that part) consisting of sixteen different fruit trees so I wonder if the design of the seating was done to be in keeping with that.

Whilst the wetland may not be huge if you are in the area it's worth taking a look at.  If nothing else, for an opportunity to observe a little more of the natural side to Singapore right in the heart of the housing in the area.


Farmway LRT (SW2) is on the Sengkang LRT line.  It can be accessed via Sengkang MRT on the North East line (NE16).

If you missed any of my previous Red Dot Roaming posts check them out here.

UPDATE - April 2015 - this was my second Red Dot Roaming adventure to a section of the larger North Eastern Riverine Loop.  Check out my earlier post on the Punggol Waterway and keep your eyes peeled for more which I already have planned for the future.