It was another Sunday where we didn't really have any definite plans but felt like going somewhere different to eat.  We'd also recently celebrated our wedding anniversary but due to my husband's travelling for work had had no opportunity to acknowledge it.  After a bit of thought and checking out suggestions made to us previously we decided to try out Oxwell & Co in Chinatown.  As on other occasions we hadn't made any reservation as it was a completely spur of the moment decision so turned up fully prepared that we might get turned away.  However the staff were more than willing to accommodate us and found us a table without any fuss.  It is fairly small (the restaurant part is upstairs) and obviously a popular place from the number of people who turned up whilst we were there, so I'd recommend making reservations to avoid disappointment.

Oxwell & Co is actually in the spot on Ann Siang Hill where the Emporium used to be and the famous pork pies!  However that's now long gone as is often the case in Singapore, but based on our meal that day I'd say Oxwell & Co is a more than adequate replacement! 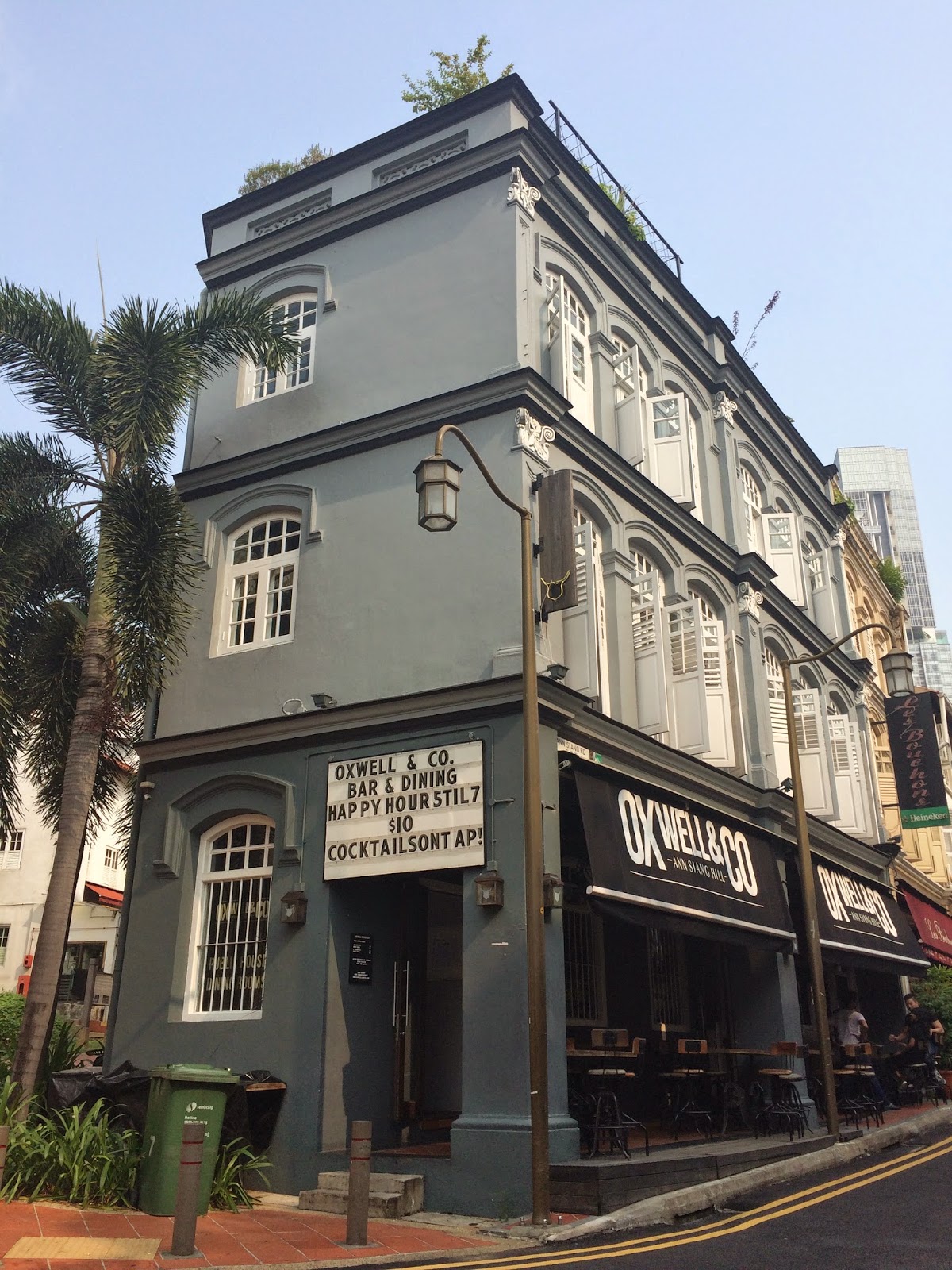 As we went on a Sunday it meant we could enjoy a roast dinner, (which was the reason we went) a bit of treat for us.  So we opted for the roast beef with Yorkshire puddings.  In addition we also ordered a side plate of Brussels sprouts with little bits of bacon.  I've never been the biggest Brussels sprouts fan, years of being served them at Christmas and having to disguise them under every other vegetable on my plate so I could force them down I guess.  However I admit in recent years, whilst still not my favourite, I can eat them.  These though were amazing and I found myself heading back for second and third helpings!  In fact so good were they that my husband was inspired when cooking our Christmas dinner to recreate them and yes his were just as good.

As you can see from the interior shots the place has a funky modern feel to it and is bright and airy with all the windows that you can see from my exterior shot above.  As I mentioned the restaurant is upstairs and in the lower part is a bar area which is equally modern in style.  As you can see in the photo below it has some fun, interesting lights as well as some interesting pumps dispensing drinks with some fun ones listed as on tap.  The decor down in the bar area is definitely a little eccentric but a lot of fun nonetheless.  Our afternoon ended with a couple of drinks in the downstairs bar which was a pleasant end to our late anniversary celebrations.

Oxwell & Co is considered as having one of the best roasts in Singapore and I'd definitely agree.  Make sure you book as it was very popular and I think we were just very lucky to get a table with no reservation.  The Sunday roast is served on Sundays from 11.30 - 3pm, check out their Facebook page here.  I believe since we visited the wider menu has been revamped so even more reason for us to make a return at some point.  Have you visited any other spots with good roast dinners in Singapore?  Let me know as I'd love to try them out!