I like to think I've done quite a bit of exploring in Singapore, though I fully admit there is a long list of things still to do.  One thing I'd never done though was go to any of the islands off Singapore, with the exception of Sentosa but I'm not really sure that counts!  Of course Pulau Ubin is probably the most famous of these and finally I recently managed to get there.

The majority of visitors to the island hire bikes, I admit I am not a bike rider but my husband (who is) and our friends who came with us were thankfully willing that day to walk around part of the island instead.  To be honest the fact I'm not a bike rider is probably the reason it has taken me so long to go.  My husband has been before and biked around and I've always had the impression you could only really ride bikes there.  Yes you'll definitely see more by taking a bike ride but you can still walk it (or at least some of it) too.  So if, like me, you don't really ride bikes don't be put off going!


It was another warm, sunny, dry day so sun cream was a definite requirement.  In case you didn't know Singapore is currently experiencing one of the longest driest spells since records began and I can only personally recall it raining twice since we got back from the UK at the start of January!  We do so desperately need some rain.  However it was a fine day for walking and it started early with a couple of (much needed) kopi's at the Changi village food court and then we met our friends and made our way over to Ubin.

Getting to the island is easy by way of an approximately ten minute bumboat ride from Changi Village jetty.  The fare costs $2.50 one-way.  There is no set timetable, boats just go once they are full, they carry twelve passengers so it doesn't take long to fill up.  I'm not sure what time the last boat goes from Ubin but I would imagine you wouldn't want to leave it until the very end just in case you got left behind and had to camp out!

Pulau Ubin is regarded as one of the last parts of truly rural Singapore reflecting what the main island used to be like before development took over.  There are many former granite quarries over the island and in the 1960s this quarrying supported a few thousand settlers but now only a handful of residents remain.  The name actually means 'Granite Island' in Malay.  The granite was used for much building work in the past including the building of the Singapore - Johor Causeway.

For me the most surprising part initially was that there were proper roads on the island, though only a handful, and that there were so many signposts guiding you to the different parts.  I'm not sure what I was expecting but I suppose I just didn't expect to see roads.  I suppose on the flip side the fact there are so many good roads could also be seen as a hint about things to come.  There are suggestions the island may be developed in time, but it did make getting around by foot (and I imagine by bike) a lot easier than I anticipated. 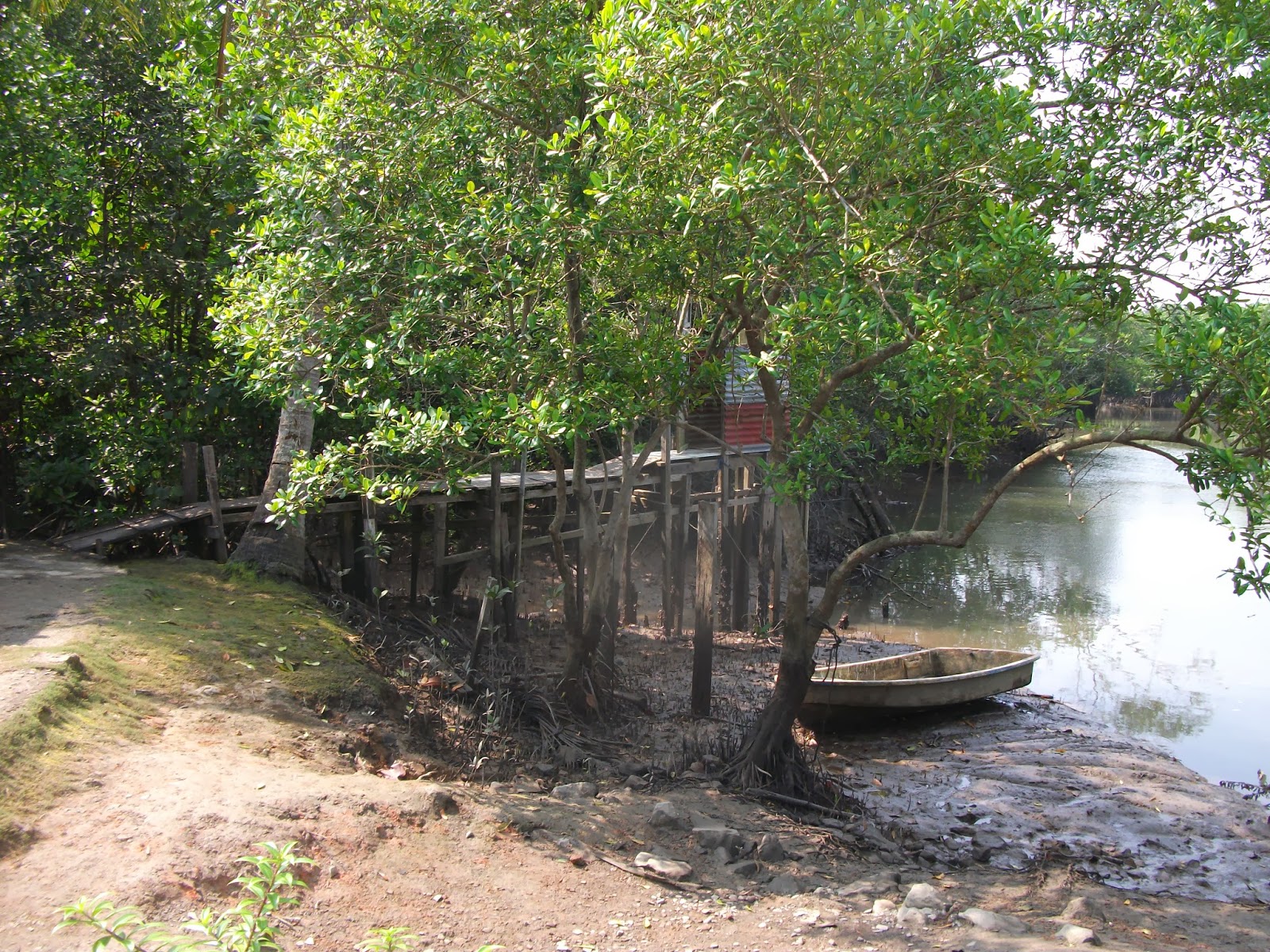 We visited on a Sunday and I was quite expecting the island to be pretty busy.  In fact although there were plenty of people there it really didn't seem busy at all, other than where all the bike hire places in the the village area after you get off the bumboats.  We certainly managed to enjoy Ubin without having to fight through crowds of people.  Admittedly we got on the island fairly early but we spent several hours there and it didn't appear to get especially busier as the morning progressed.  I'm not sure how far we walked (several kilometres) but thankfully there were several drinks carts selling water etc. dotted around the island.  I'd recommend taking your own as well though just in case! 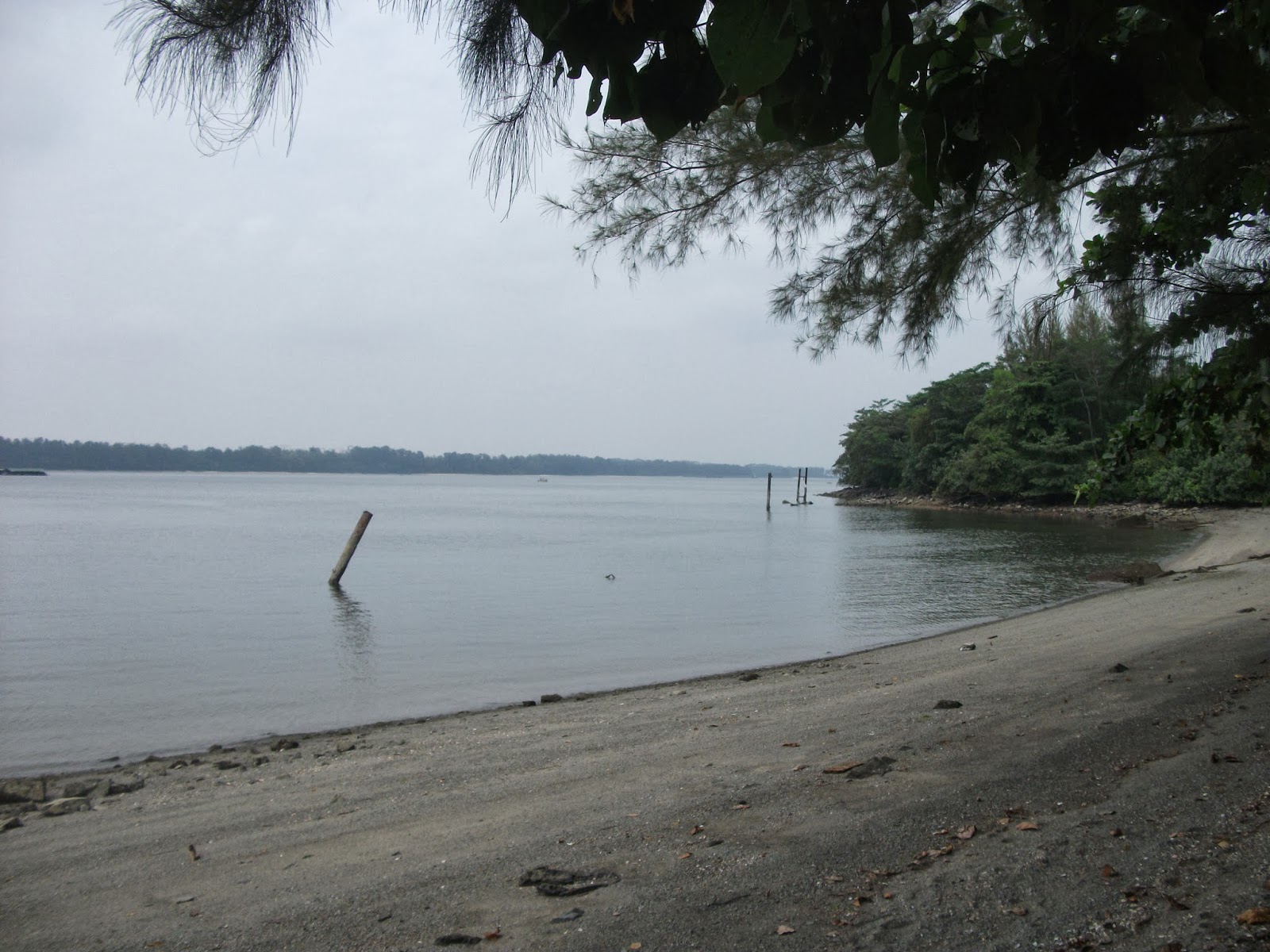 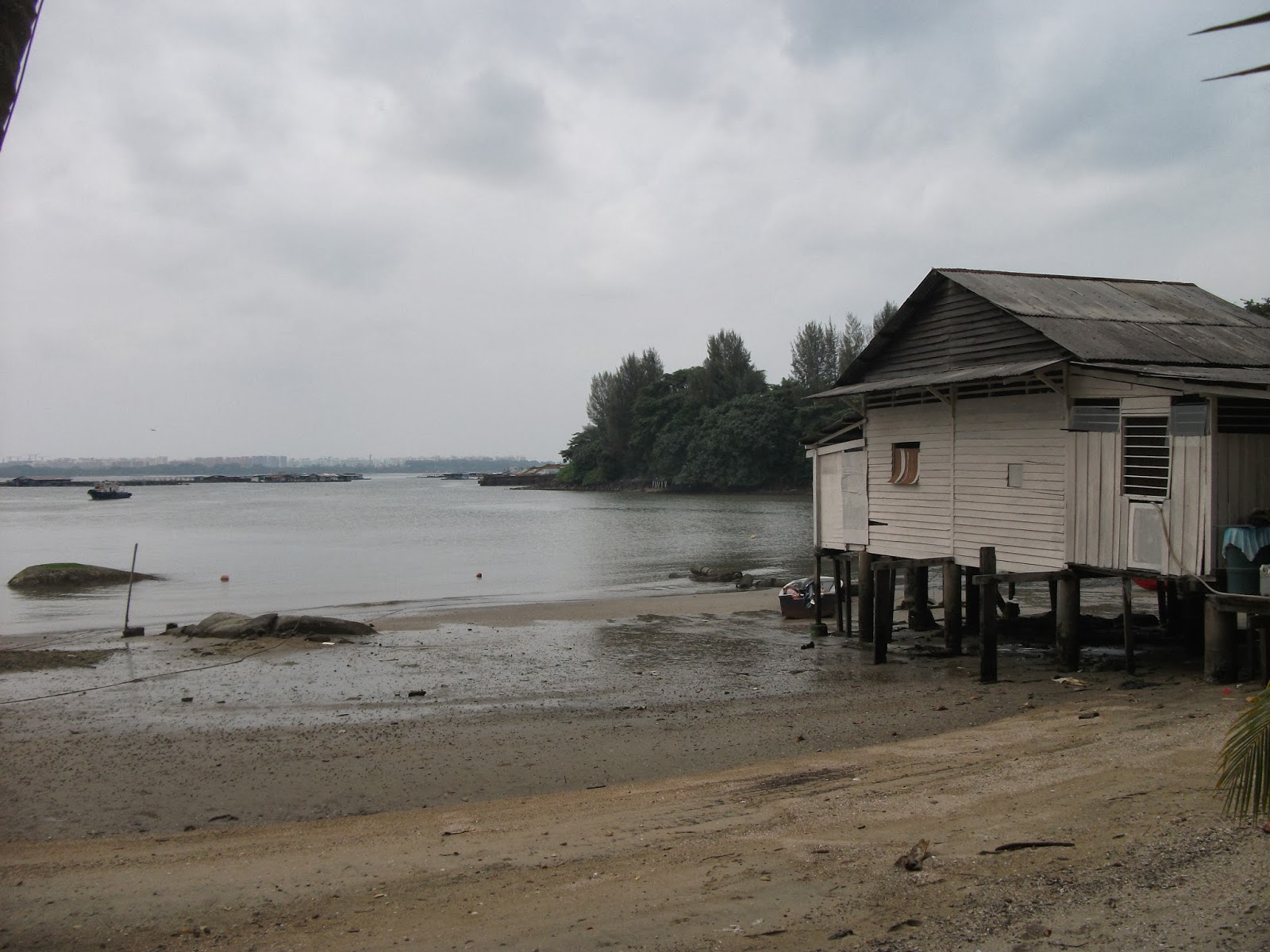 I had hoped we might get to see some interesting wildlife whilst we were there.  Sadly though all we got were just a few insects.  However we did get to see a very different Singapore to what I see usually, an interesting and slightly unusual spot (more on that soon in a separate post) and some different views across to Malaysia.  Somewhere (can you believe it) I still haven't been too!

Whilst there I was struck by the thought of what a fun place this would be to come for bike rides in the school holidays.  When I was younger I did ride bikes (alas not well) with friends and I'm sure we'd have loved to have had a place like this on our doorstep to go exploring in.  I really hope then that the island does not get altered too much from how it is presently. 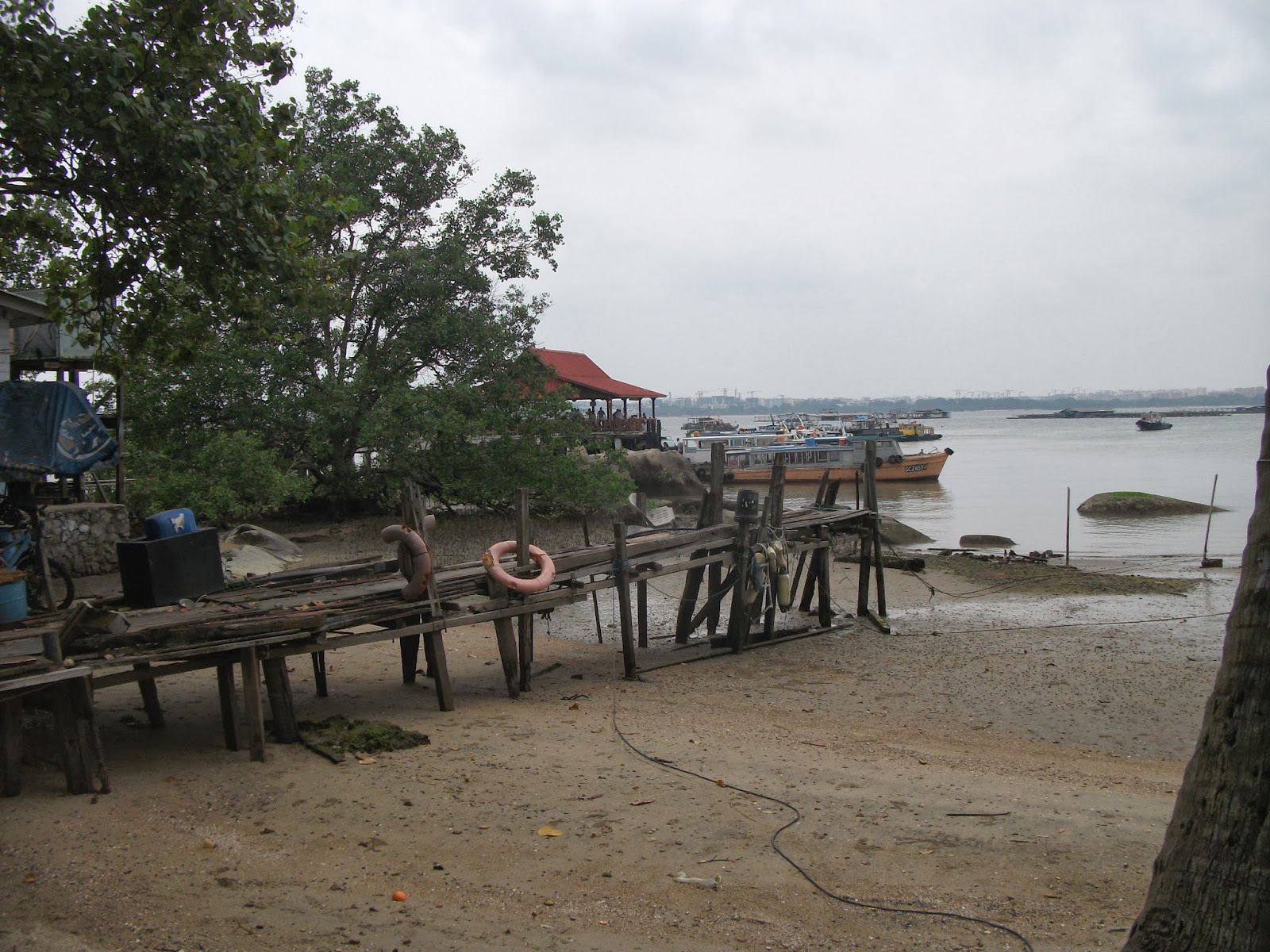 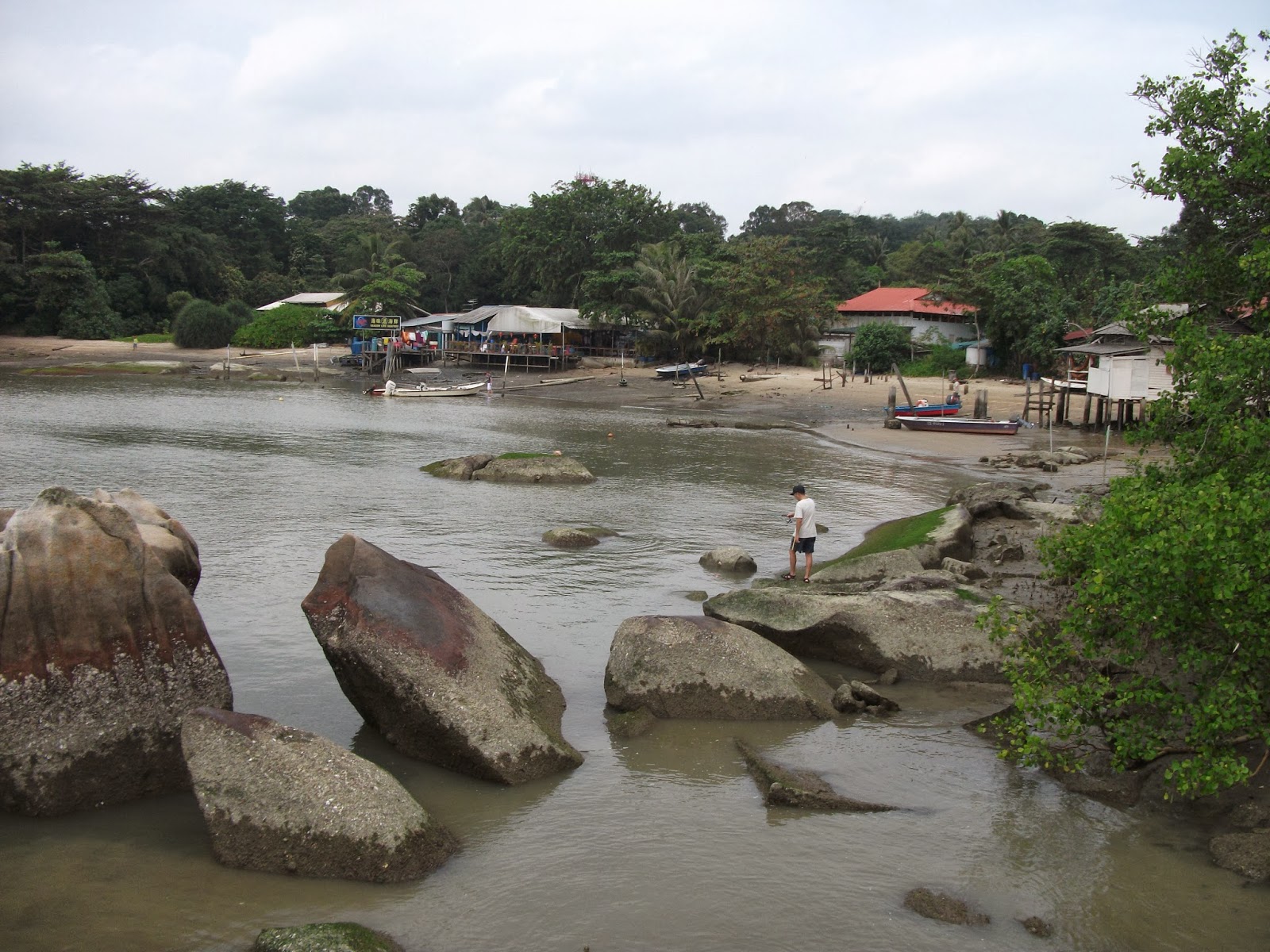 After walking back to the village area on Ubin we were all pretty tired and in need of some refreshment and food.  We'd hoped to eat at the restaurant on the island as it looked good.  However it was lunchtime and incredibly busy with no one looking like they were leaving at any point soon unfortunately.  We walked just a little further towards the jetty and found a place serving drinks so managed to quench our thirst at least.  Instead of waiting to see if we could get a table (we were very hungry) we decided to get the bumboat back to Changi village and eat at the hawker centre there.  We had a great morning but I was so glad when we eventually sat and ate!  We all certainly got our exercise that day.