I mentioned in my previous post after my visit to Pulau Ubin that whilst there we managed to see something quite interesting.  This being the German Girl Shrine.  I had actually already heard of this, thanks to a previous blog post I'd read sometime ago (and others since) but I had no idea where it was on Ubin and whether, given we were walking, we'd be able to get anywhere near it.  Luckily though we managed to do just that and did get to see this curious place.

It was not that well signposted but wasn't too difficult to find thanks to it being in a bright yellow building tucked just down a side road and clearly visible from where we were walking.  There was a sign on the road for the shrine just before we arrived at it, but this was the only one and only directed us in a fairly general direction.  So if you go looking for it yourself make sure to keep an eye out for that yellow building as you could easily walk right past it. 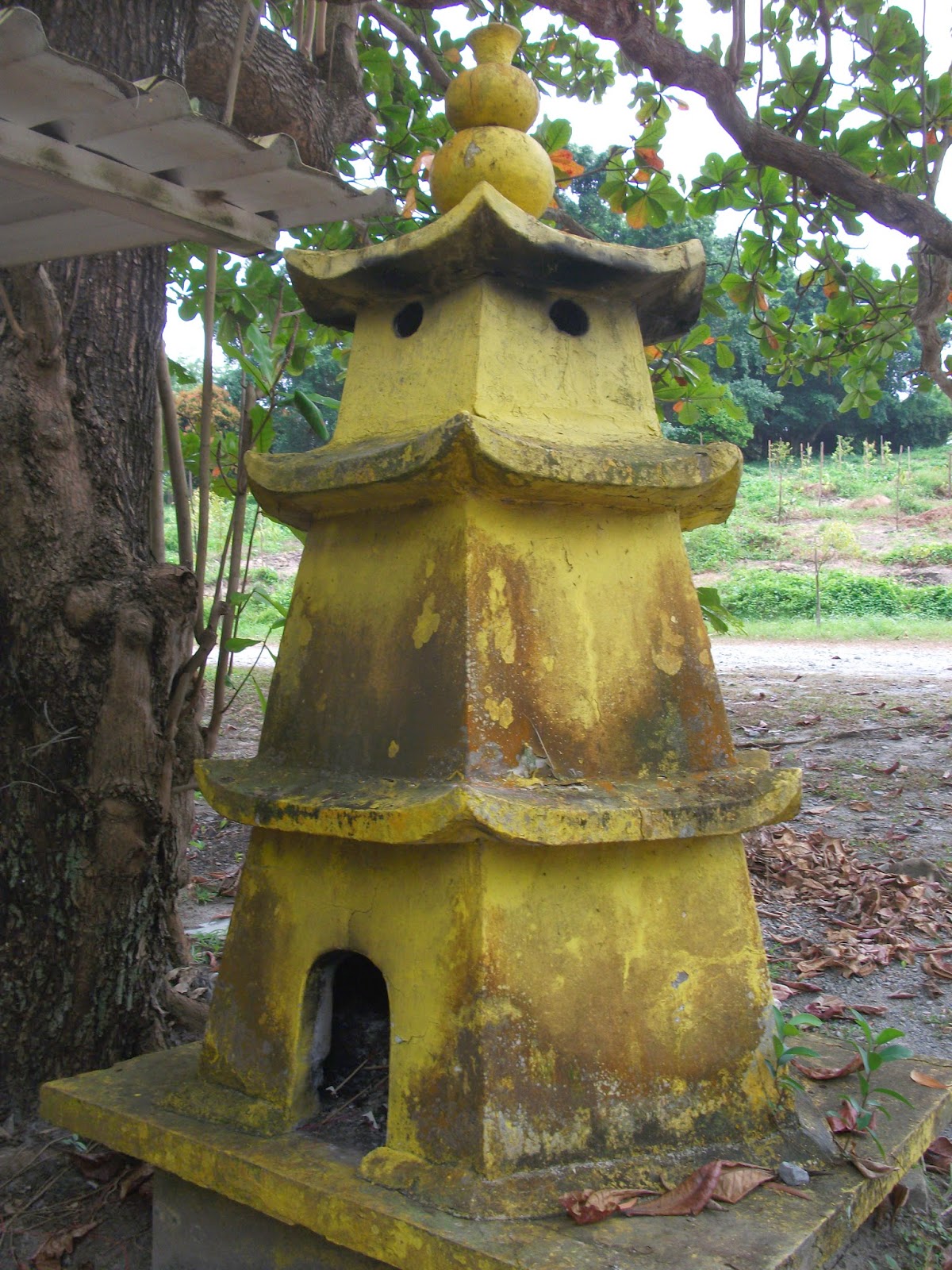 The German Girl Shrine is actually a little bit of a mystery it seems.  The story dates back to before the First World War and to a German family who owned a coffee plantation on Pulau Ubin at the time.  The land actually belonged to two German families but the exact identity of who the German girl was is not known.  When war was declared in 1914 the colonial Government here in Singapore began seizing German businesses, properties and so on, including the coffee plantation on Ubin.  The girl managed to escape into the woods, no one knows exactly what happened after that but a few days later her body was found.  It was assumed she had got lost and fallen to her death. 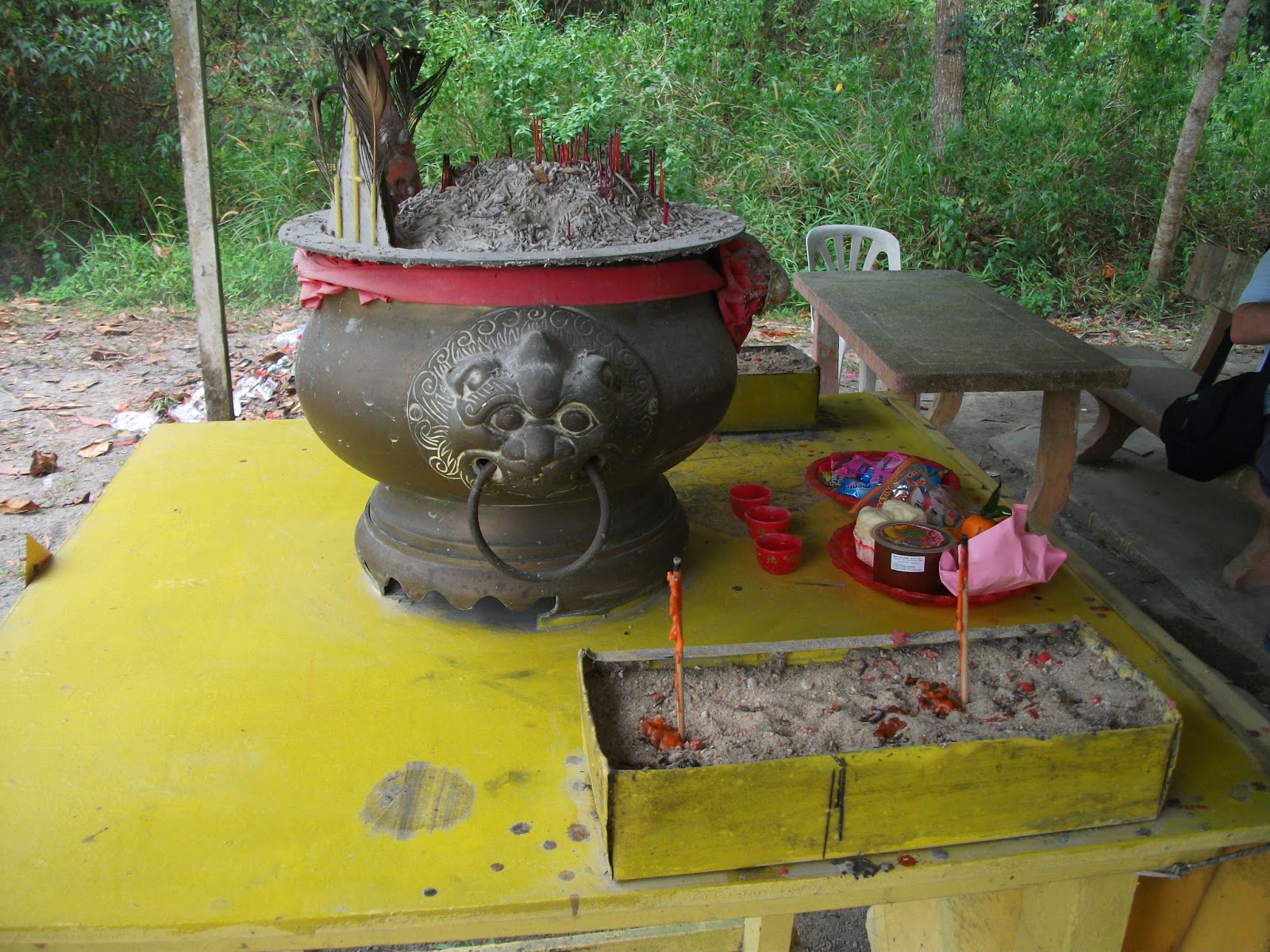 The story surrounding this unknown German girl goes on to say that when the war was over her family returned to try and locate her remains.  Sadly they weren't able to do so and so left Singapore.  The remains were said to have been kept in a Taoist temple where they remained until, in the 1970s, a new temple was erected to house them.  In time this temple became a popular place for worshippers praying for good luck in gambling.  By then the girl was regarded as a deity as some lucky gamblers attributed their good fortune to her and the shrine was adorned with offerings of fruit, flowers and other things as more and more came to worship there. 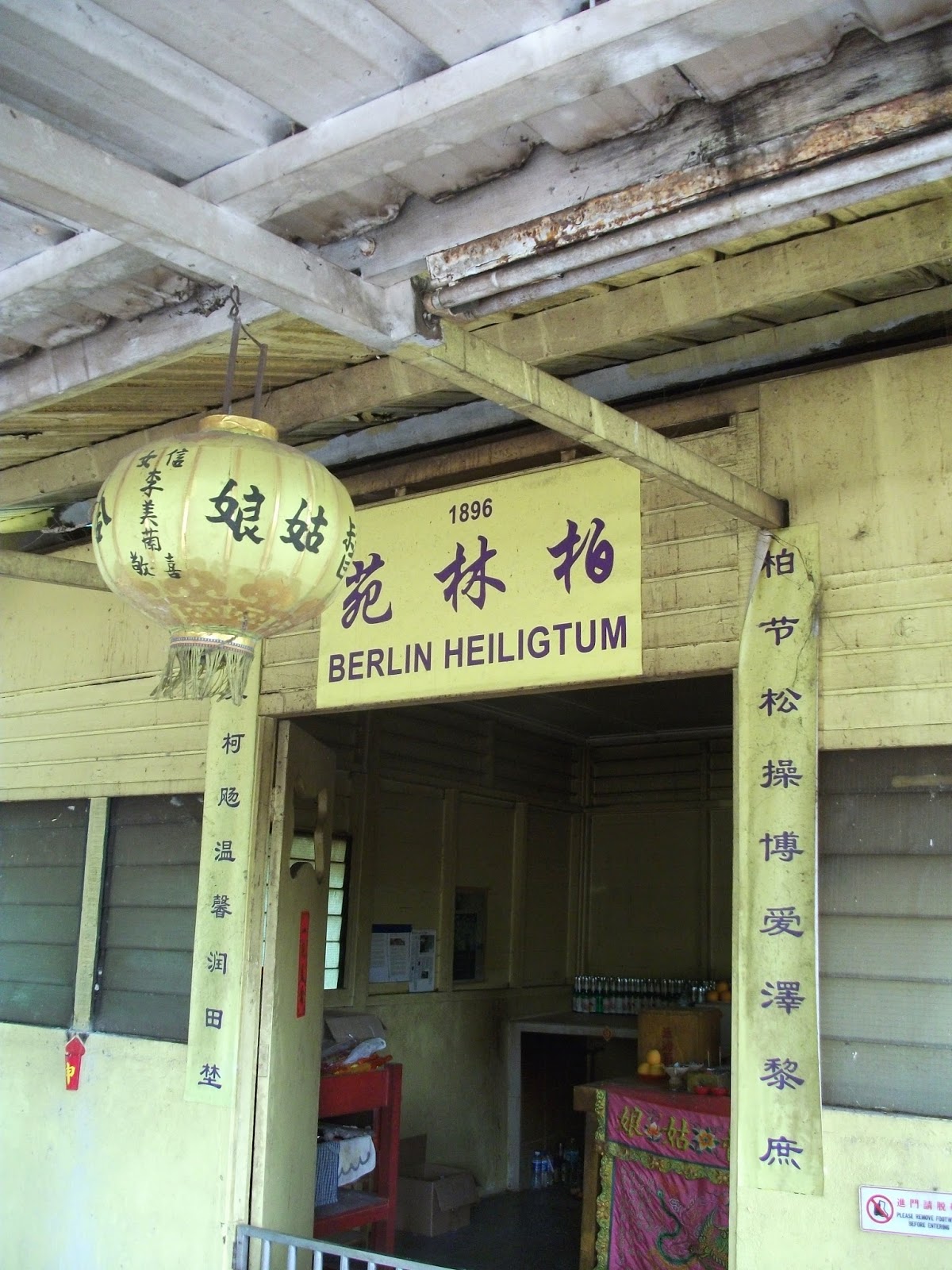 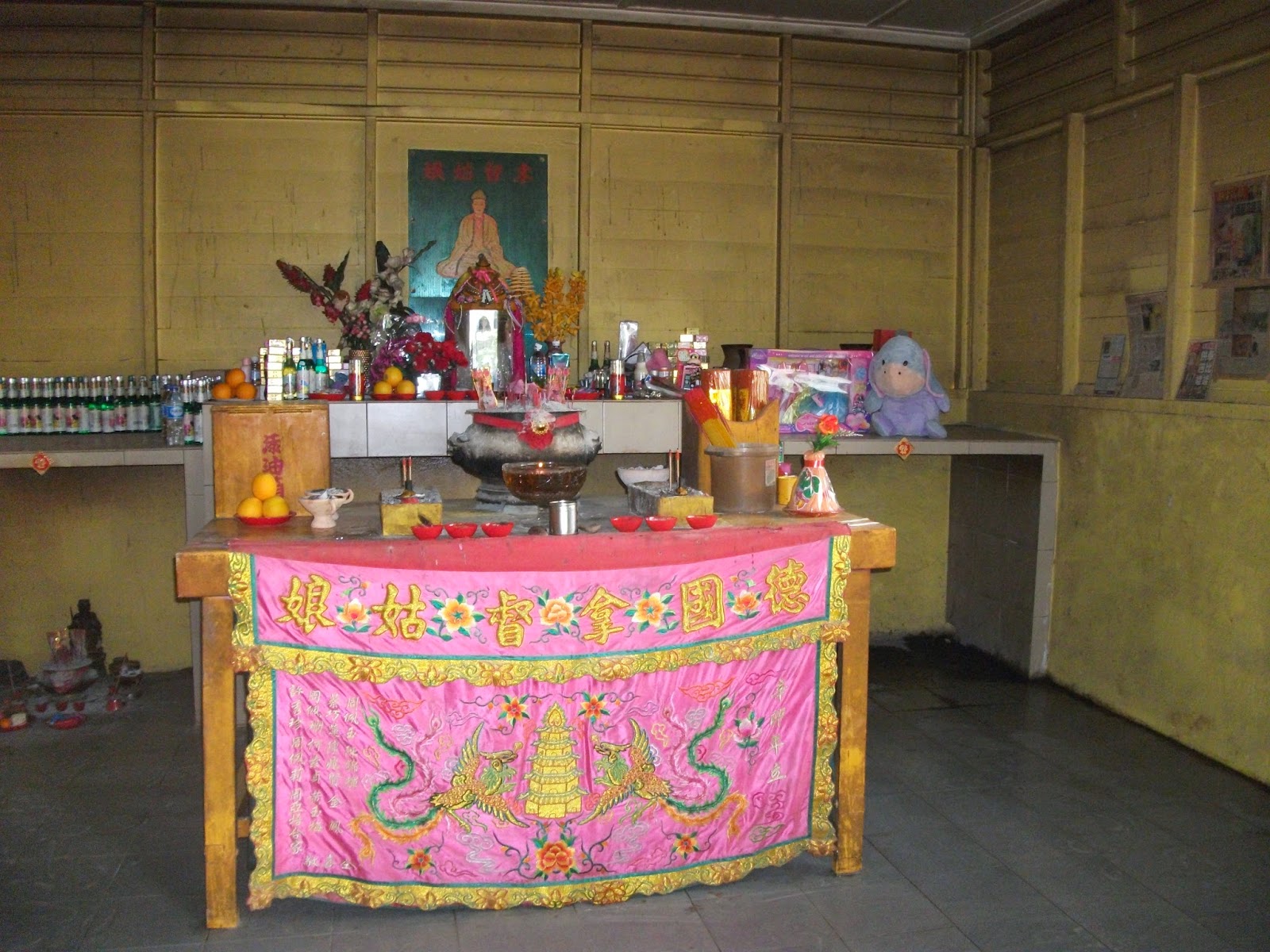 The story reached its conclusion when a local who had migrated to Australia had several dreams about the deity and to pay his respects subsequently went out and bought a Barbie doll which he sent to Pulau Ubin.  The doll has since become the symbolic idol of the shrine and is still there along with many items typically associated with young girls/teenagers.  People still regularly come to leave these items and pay their respects to the girl.

Having visited many temples this one with its cuddly toys, make up, perfumes and so on is certainly the most unusual and quirky I've seen.  Sadly it seems now that the identity of the German girl has been lost in the mists of time and will probably never been known.  Although it seems unusual for her memory to be preserved in this way it is also lovely to think that this unfortunate nameless girl is remembered still to this day. 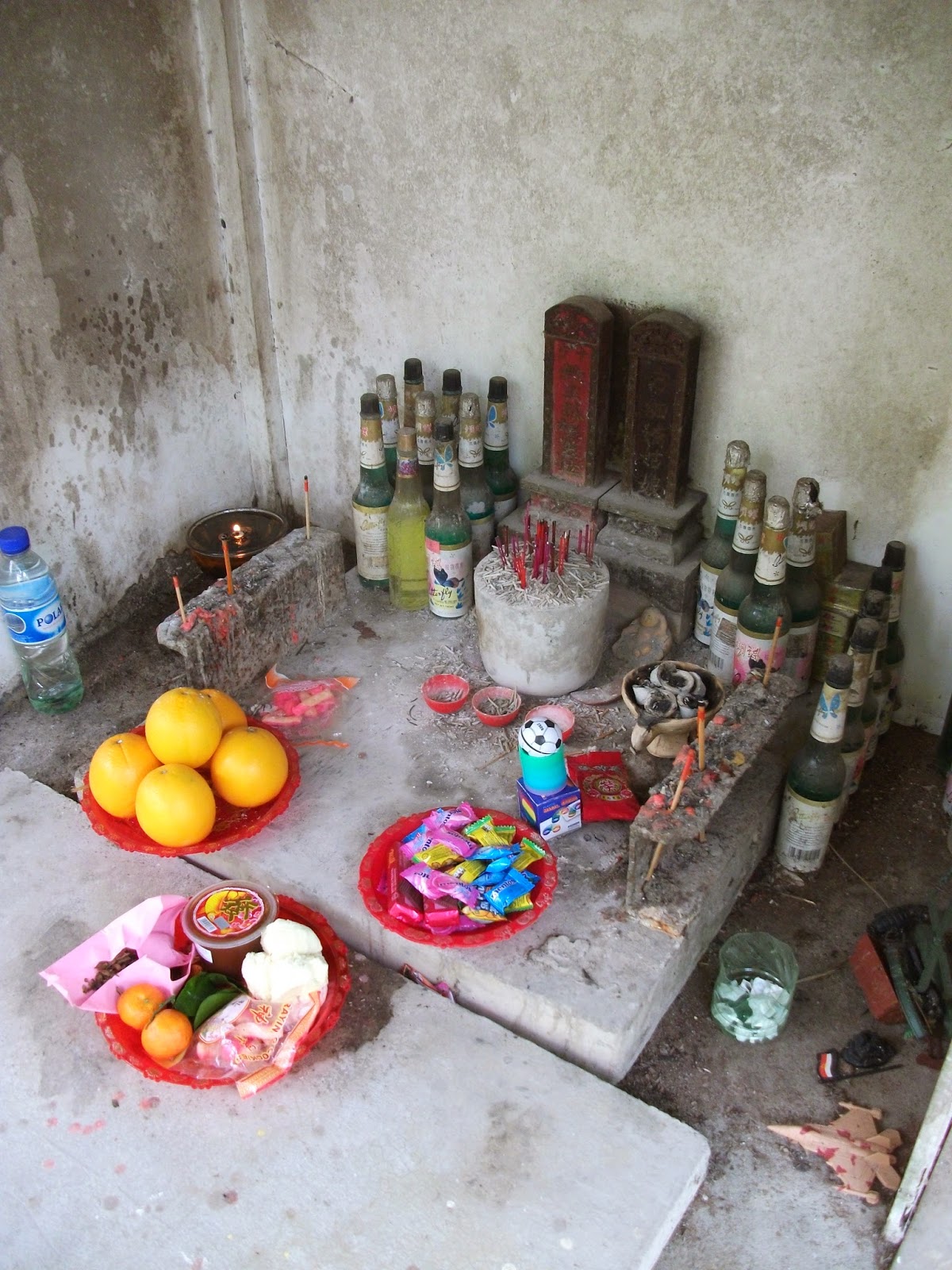