Walking Around Grasmere and Rydal Water

Being in the Lake District for the week meant that, subject to the weather staying fine, we naturally had to do some walking outside in the beautiful countryside.  I'm not a hardened hiker or anything but before we went a number of family members let us borrow various walking books with a whole variety of walks in the Lake District, from relatively easy strolls through to all day hikes.  So there was no excuse for not at least giving one of the easier walks a go.


Our first attempt was thwarted by the weather.  It had been rainy on and off that morning and when we arrived at Grasmere (where our chosen walk began) it, of course, rained.  So we initially went for a coffee in the hope it would ease up.  It did for a while and we walked off to enjoy our picnic somewhere close by before setting off.  At this point the heavens opened again and a mad dash back to the car saw us eating the rest of the picnic watching the rain from the car and eventually deciding to give up on the idea for the day.  However the next day dawned much brighter (it was a beautiful warm summer's day) and so the plan was put into action again. 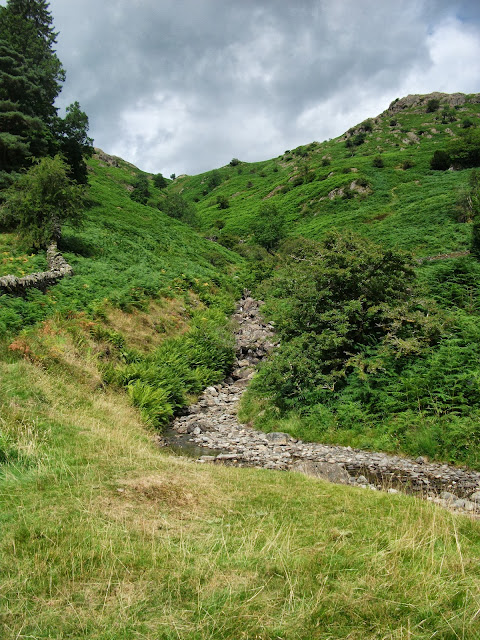 The poet William Wordsworth lived for most of his life in the Grasmere area and our walk took us past two of his homes.  The second providing a much needed rest and refreshing drink point.  Before reaching his first home we passed the 13th century church in Grasmere where he and many of his family are buried.  He was a very keen walker apparently so I'm sure would have walked many of the paths we took that day.  His first home, that we saw, was the 17th century former inn, Dove cottage in Grasmere.  Apologies I have no photo though as it was impossible to get one without also getting many random people in it too.  He lived there with his sister Dorothy for nine years.  Whilst living there he wrote much of his most well known poetry, got married and his first three children were born.  When the Wordsworths' needed a larger home and eventually moved out his friend and fellow poet, Thomas De Quincey moved in to the cottage.

Leaving Grasmere to follow the walk around Rydal Water we encountered the first slight climb of the walk.  It wasn't very steep but it certainly warmed us all up.  The walk we chose to do was five and a half miles and the book estimated it could be done in three hours.  Amazingly it only took us a little longer than that to complete and I think that was simply because we went a little off route at the end of the walk and we also stopped for a drink and rest half way.  The majority of the walk was in a circle around Rydal Water.  We firstly walked below the fell, Nab Scar with the water on our right before eventually arriving at Rydal Mount the second home of Wordsworth on our walk.  Here there was also a very convenient tea shop so, as I mentioned, we stopped for a refreshing drink and a breather.  What made our stop even more lovely was that the tea shop owners brought out to us some scones with jam and cream which they had left over.  As that type of treat is a rarity in Singapore and walking builds up an appetite they were enjoyed by me all the more!

Although we did not go into Rydal Mount (though you can do) you could see the house and the difference between that house and Dove Cottage.  It was a much grander and larger house which Wordsworth lived in until his death and which is still owned by a descendant of his.  After our much needed break we walked on past Rydal church on towards Pelter bridge in my photo below.  Pelter bridge is an old pack-horse bridge crossing the river Rothay and made for some very pretty photos.

After passing over this bridge we followed the track around (past that ice cream van hidden in the trees above) past a few houses and eventually on past caves and through disused quarries.  We were now rounding the circle we were following so that Rydal Water was coming into view once again and as we walked we climbed steadily higher.  This gave some spectacular views over the water to the hills and mountains in the distance.  We were also able to appreciate Nab Scar, which we had previously walked underneath, from across the water.  The caves were also very exciting (though we didn't go in them) and full of birds which were flying in and out of them constantly.


As we carried on around our beautiful vantage point it was here that we made a mistake in the route we were following and missed the path we were meant to follow to take us down to the water's edge.  Luckily we found another route down and followed that one instead.  I'm not sure how much more, if anything, this added to our walk but thankfully we found our way back on to the route again and eventually back to where we started. 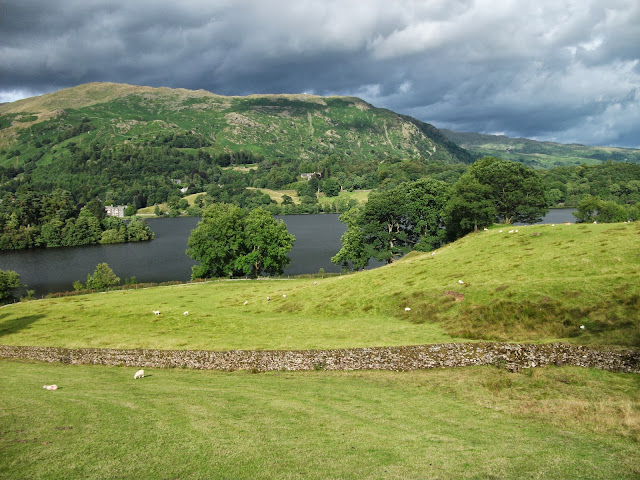 I was pretty tired by the end of our walk but I thoroughly enjoyed being out in the open air and getting to see such fantastic views on foot.  I would happily have done more if time had permitted.  I guess we'll have to go back again and try some of the others at some point.
Email Post
Labels: Cumbria Grasmere history Lake District photos places to visit Rydal Water things to see travel trips UK walking weather wildlife
Location: Grasmere, Cumbria LA22, UK