We visited the zoo for the first time not long after we moved to Singapore and have returned since, it truly is a great place.  Towards the end of last year though a new reason presented itself for going, the arrival of two giant pandas and the opening of the new River Safari.  We decided to let the initial rush of visitors die down before visiting and spontaneously decided to finally go one Sunday morning.

Of course the pandas are by far the stars of the show but the exhibit has a lot of other animals to view as well.  The theme focuses on the wildlife of some of the largest and most well known rivers of the world, the Mississippi, Congo, Nile, Ganges, Murray (we revisited the River Safari in August 2015 and the Murray river part of the display has now gone), Mekong and Yangtze.  There is also a part of the safari which focuses on the Amazon but this section will not be open until later this year.  As a result at the moment entry prices to the safari are a little cheaper. 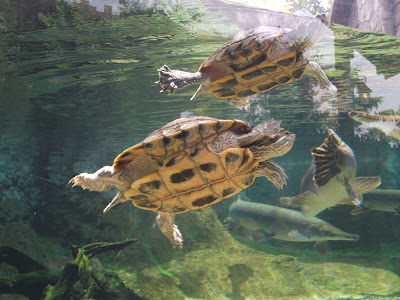 As you walk through each section you learn a little about that river and its wildlife and of course see some of it too.  As I said the main stars of the exhibit are the two giant pandas, Kai Kai and Jia Jia.  I'd never had the opportunity to see giant pandas before so I was very excited and they didn't disappoint.  Although we only actually saw Kai Kai that afternoon (Jia Jia is shyer apparently) but still one panda is better than none!  I also fell in love with the Red Pandas which you can see in this part of the exhibit as well.  I have been lucky enough to see them in other zoos and their beautiful reddy/orange coats truly are stunning as well as having incredibly cute faces!

I assumed that once we'd seen the pandas that would be the end of the safari.  However as soon as you leave there is the Amazon exhibit (open later this year) to see.  Even though it is not open yet there are some parts you can see (since writing this and revisiting in August 2015 the Amazon River display is now fully open) and our afternoon was rounded off by walking through a mini monkey forest of Squirrel monkeys running in amongst the trees and branches above our heads.  Finally we got to see manatees another animal I don't think I've ever seen in real life before.  Although they are big animals they are so incredibly graceful in the water and mesmerising to watch.  It's no wonder sailors used to think they were mermaids. 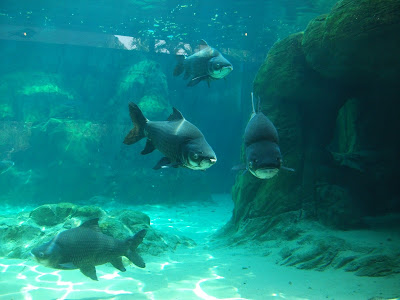 Our visit was well worth it and I'd highly recommend it along with the zoo and the night safari.  I don't think you could hope to do all three in one day though simply because you'd never see everything and you'd be exhausted!  All three though are fabulous days (and nights in the case of the night safari) out.