Mummy: Secrets of the Tomb

The latest exhibition at the ArtScience museum is another not to be missed.  Especially if you are interested in the Egyptians which, lets face it, if you've been to the British museum you'll know is perhaps the most popular part of that museum.  Or at least that's certainly the case whenever I've been and it's one of my favourite sections too.  This latest exhibit at the ArtScience museum is presented in collaboration with the British museum who've loaned various artefacts as part of the display.  Naturally when I heard this exhibition was coming to Singapore I knew I had to go and see it. 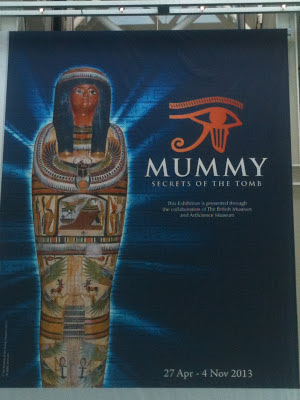 The exhibit tells you about the ancient burial practices and mummification processes that were followed by the ancient Egyptians.  It begins with an excellent 3D film about this process following the specific story of 3000 year old mummy, Nesperennub.  His original cartonnage has never been opened but modern science allows us to see right inside.  I thought the film was excellent though possibly a little gruesome in places for very young or sensitive children as it does describe the process of how the brain and internal organs were removed from the body.

Nesperennub's mummy was discovered in Luxor in the 1890s.  He was alive around 800 BC and died when he was aged approximately forty.  He had lived in Thebes and worked as a priest in the temple of Karnak and was also a fan-bearer to the King.  The ground-breaking x-rays done on his mummy by the British museum in 2004 show some interesting things that experts have been unable to explain conclusively.  I won't spoil it for you here though, you really need to go and see the exhibition for yourself.

After the film visitors then walk through the exhibition which includes over 100 artefacts and six mummies loaned from the British museum.  For me the mummies were the best part of this section, similarly to how they are my favourite part of the Egyptian galleries in London.  That said though there is lots of interesting information about the processes used and the importance of these pieces to the ancient Egyptians in their rituals surrounding life, death and the afterlife.

Mummy: Secrets of the Tomb is on now at the ArtScience museum until 4 November 2013.