Jakarta - Traffic and a Lively Bar and Restaurant Scene

As I've mentioned before my husband, like many others, does a lot of travelling with his job and has decided to pen the odd piece about some of his most regular or most interesting business travels for me to share here.  Although, as anyone will tell you who travels for work, you don't necessarily get to see a place well under these circumstances he generally doesn't do bad for finding a few varied places to dine and exploring in any free time he does have.  I can't help but feel a little envy at the amount of places he gets to visit.  My own travels for work never ventured out of the UK and were all incredibly dull in comparison.  Fingers crossed perhaps I'll get to a few of these places too one day.  In the meantime though, over to him.

In my quest to see the entire region from the inside of a series of high-rise swanky glass towers, I recently went to Jakarta (again), Indonesia’s busy over-crowded capital (a mere 85 minutes from Singapore on one of SQ’s shiny 777’s, well crappy old treble sevens).  First impressions as you arrive at the airport are not necessarily favourable (the facility would be best described as retro) but all airports are a nightmare, exceptions being Changi, Heathrow T5 (I am an unashamed fan) and perhaps Hong Kong.  As a Brit, American, Aussie or, in fact, anyone not from South East Asia you are required to obtain a Visa on Arrival, easy enough once you have paid the $25 (US) or 250,000 rupiah (other currencies are welcome but you’ll pay more).  Taxis to the city are plentiful, use the Silverbird brand, go to the rank outside the airport, as opposed to the desk after customs.  It is half the price for the same journey for a nice air-conned Mercedes as opposed to a standard cab (costing the same as the Merc) that will be mozzie-infested and unpleasant, with the fare being about 200,000 rupiah to the city / hotel (between $30 and $40 Sing dollars).

Hotel wise, I have stayed at a few, mainly five star business versions.  These include the Kempinski (Indonesia Grand), where the toilet in your room is automated, opens when you walk into the bathroom and flushes when the business has been concluded.  The Four Seasons, view is not quite as good as the Sydney version of this hotel, overlooking the Harbour Bridge, and the restaurant staff are over-attentive.  The Mandarin Oriental (sandwiched between the British and German Embassies), with brilliant rooms.  The Pullman (formerly the Nikko, so has a very Japanese feel, including a Japanese restaurant called Origami, it’s really quite good) and the Fraser Suites (don’t stay here, it is very isolated and breakfast was rubbish).  Favourite has to be the Mandarin Oriental that has a fantastic bar, is in a great location and with fabulous breakfast. 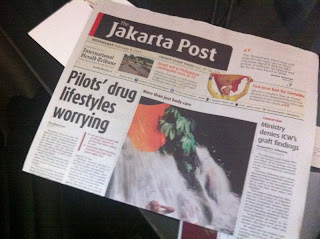 Whereas one would not describe the city as being on the tourist map, it must be noted that food and eating options are excellent.  On my last trip I dined in the Cork & Screw (Jl Kebon Kacang Raya), an up-market type bar with an excellent wine selection.  I visited twice during the trip having a Moroccan Cous Cous dish that was delish, washed down with an indiscriminate international lager originating from Holland and steak and fries, washed down with a glass of Merlot, well actually three glasses, from France.  On the second night I visited the Jakarta branch of Face Bar (Jl Kusuma Atmaja 85).  I have wanted to go to this restaurant since I visited the excellent Bangkok version with my wife (she was a girlfriend back in those days).  The place gives you the choice of Northern Indian or Thai food (there is an additional Japanese option in Bangkok).  My colleagues and I opted for the Thai option (all frequent Bangkok visitors) but decided to have some cheese naan as part of the starter / appetiser with fish cakes and chicken spring rolls.  The main courses selected were a Mussaman curry, black pepper chicken and spicy bbq’d prawns.  All dishes were excellent and accompanied with a couple of Singhas (when in Rome, so to speak).

Also excellent to eat in is Social House, next to the Kempinski Hotel, with a mixture of many styles of food, western, Asian, brunch and dinner.  I have been here many times and often have the Pho Bo (I am well into Vietnamese food now having also travelled there not so long ago) which is excellent.  The restaurant also sells food items from the Harvey Nichols brand as it used to be connected to a branch of that famous UK shop (since closed).

Over the coming months, projects pending, I hope to explore the city more extensively and perhaps find those sightseeing depths hidden in the dense traffic jungle.  Did I mention, the traffic in Jakarta is horrid, easily the worst in Asia, given that there is an extremely limited public transport network, except buses that are so overloaded that the health and safety bods would have a coronary.
Email Post
Labels: food Indonesia photos places to visit restaurant Thailand travel
Location: Jakarta Capital Region, Indonesia