The latest travelling exhibit showing at the ArtScience museum is, 'Andy Warhol: 15 Minutes Eternal', which I was invited to go and see this last weekend.  I admit to not knowing a great deal about Andy Warhol beyond him being a part of the pop art scene and knowing of his iconic Marilyn Monroe and Campbell's soup tin prints.  So I was looking forward to visiting the exhibit and hopefully expanding my personal knowledge.
﻿﻿﻿﻿﻿﻿﻿﻿﻿﻿


The exhibit features over 260 of his paintings, drawings and sculptures as well as film and video of the artist's work and are on display here on the 25th anniversary of his death.  It encompasses the breadth of his career and personal interests and is the first time such an extensive collection has been exhibited in Singapore.  The exhibit is named after perhaps Andy Warhol's most famous quote (and one of the other things I could confidently say I knew about him beforehand), that everyone will enjoy fifteen minutes of fame.

As you walk through the tour you take in four key stages of Warhol's life, beginning with the 1940's right up to his final works in the 1980's.  The first section has examples of his early work and the influences on him.  This includes the drawing below (being a cat lover I was instantly drawn to this one) which, I learnt, is an early example of the blotted line technique he developed.  If you look closely, when you visit, you can clearly see gaps in the outline of the cat.
﻿﻿﻿﻿

We then came to the artworks I was most familiar with, in a section titled, 'The Factory Years - 1960's'.  Here were those prints of Marilyn Monroe and the numerous Campbell's soup tin prints.  This section also allows you to experience a recreation of the Silver Factory.  This was what Warhol's studio in New York in the 1960's was known as because it was entirely covered in silver foil.  In here you can enjoy some of the films Warhol made as well as play with huge silver helium balloons, a recreation of his piece entitled 'Silver Clouds' from 1966.

The 1970's part of the exhibit takes you on to Warhol's interest in the use of Polaroids to photograph celebrities and his commissioned portraits of them.  There are numerous photographs and portraits on display and it is a fascinating glimpse back into the world of celebrity from this time.  You also get to see one of the many time capsules that Warhol began creating at this stage, containing meaningful items from his life.

Finally you enter the 1980's, here were a group of paintings that I was personally really taken with, his Endangered Species series.  A series of prints of some of the world's endangered animals in beautifully bright colours.  This section also includes 'The Last Supper' (see below) which was created at the very end of his life.

After you leave the Warhol exhibit you can also view in a separate gallery how his work has influenced South East Asian artists.  I would recommend you take a look at this as there are some wonderful pieces done in a Warhol style but with a uniquely Asian slant.  For example, a take on the famous Campbell soup can prints using local household brands of luncheon meat and tinned lychee's.

The exhibition also allows visitors to get some hands on experience too with silkscreen printing workshops (a technique used by Andy Warhol) being run every Saturday and Sunday, 2pm - 3pm.  As part of my visit I had the chance to have a go at this too.  Apart from a few arts and crafts I haven't done anything like this for longer than I care to think about (certainly I was at school) but it was great fun and I was very pleased with the end result.  If you fancy trying your hand at this the workshops are run in the Main Galleries (Level B2) and it is open to all-access pass and 'Andy Warhol: 15 Minutes Eternal' ticket holders only.  Registration for this commences half an hour before the session starts at the workshop venue.  In addition to this there are also a wealth of fun things for children (and adults) to interact with in the exhibit and to take away with them at the end.  Including the chance to make your own Warhol style glasses and make a time capsule box to keep your own meaningful items in. 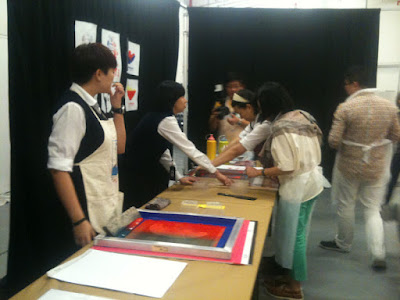 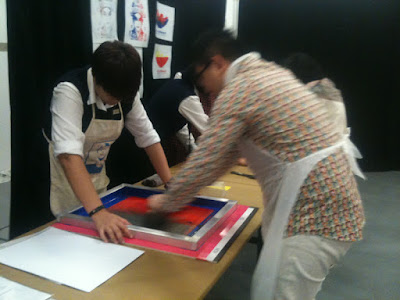 As I said at the start, I hoped to leave with a bit more of an understanding about Warhol and his work and I left feeling I knew more about him than when I had arrived.  Whether you are an aficionado of Warhol's or a casual observer, such as me, I think you'll enjoy your visit and the chance to get up close to some of these iconic art works.

'Andy Warhol: 15 Minutes Eternal' is on now until 12 August 2012 at the ArtScience museum.

Ticketing details are as follows:

Price for admission to Andy Warhol and ArtScience exhibition only:

Prices are inclusive of museum admission, 7% GST and booking fee.

Tickets can be purchased on the ArtScience Museum website, www.marinabaysands.com/ArtScienceMuseum and all Marina Bay Sands box offices.

Singapore Citizens, Permanent Residents, and holders of Employment Pass, Work Permit, or Dependent's Pass must show valid proof of identity (ID) upon purchase, subject to one admission ticket per ID.

10am to 10pm daily, including weekends and public holidays.  Last entry into the ArtScience museum is at 9pm.