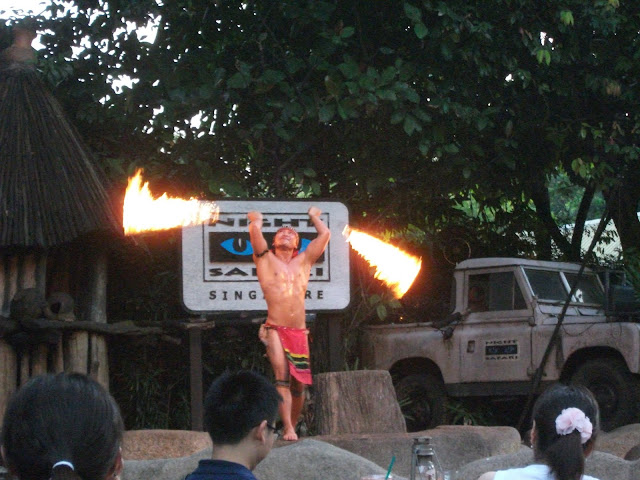 It seems like a long time ago that we visited Singapore zoo for the first time and, of course, we took my stepsons there whilst they were staying with us as well.  We had not visited the night safari though and decided we would save this for when they came.  When we took the boys we didn't do both in the same day and I'm very glad about that.  I've heard of visitors doing the zoo and the safari in one day but I do wonder how they managed it.  Especially in the heat and (probably more so) the humidity of Singapore.

We got there a bit before it opened and decided to have our tea at one of the restaurants close to the entrance.  The food was nothing spectacular but good enough and what you would expect to get in such a venue.  Whilst we were eating we were treated to a Thumbuakar performance (see the photo above).  The show consisted of tribal style dancing, acrobatics and fire eating tricks, the performance was a very exciting show.  We were sat so close that we could feel the heat from the flames at times.  The best part of the show though was when they got a member of the audience on to the stage.  They managed to convince him he was to be involved in the show (even getting him to take his top off to prepare).  They then made him shut his eyes and convince him he'd be putting the flames out himself.  Of course he didn't and was left there looking a bit silly as they performed around him.  However all credit to him for being willing to get involved, I'm not sure I'd have been so happy to.  I've since tried to find out a little more about this group but frustratingly I have not been able to.  Even the Night safari website does not tell you much about the performers.

Following this, and the completion of our meal, we entered the safari and immediately got in the queue to board the trams which take you around the majority of the exhibits.  I have to be honest in that it was a bit of a mad scrum, although the queueing system was effective.  I suspect this was because we entered not long after the safari opened (7.30pm) so perhaps you may be better to hang on and let the initial rush subside.

The tram takes you around the safari with a recorded commentary telling you a bit about the animals you are seeing.  Sadly I was not able to get any good photos as it was just too dark for my camera and my fiance's.  Obviously, to avoid distressing the animals, flash photography is not allowed, so after a few attempts I gave up and just concentrated on enjoying the ride and what I was looking at.  I really did not appreciate how big the safari was and in turn how big the land that the zoo and safari cover altogether was until we went here.  I was also surprised by the number of exhibits on show including some animals that you don't see in the zoo itself.  Amongst many some of my personal favourites included the Malayan tiger, striped hyenas, lions, leopards, hippos, Asian elephants, Malayan tapir, fishing cats (can you tell I'm a cat, both large and small, lover), rhinos, giraffes and zebras and a whole lot of others too.

Once you've finished the tram ride there are then set routes that you can walk around to see both the animals not on the tram route and also get a little closer to some of those that are.  Of course, unlike the zoo, you have to stick to the set routes as there is very little unnecessary lighting and there is always the risk of you wandering somewhere you should not.  By doing the walking parts too you also get to go in to the bat enclosures and a cave section displaying animals and insects that like dwelling in caves.

As well as the shows at the entrance to the safari there is also an amphitheatre showing a 'Creatures of the Night Show' on Fridays, Saturdays and the eve of Public Holidays.  We did not catch this show so I'm afraid I do not know how good or not this is.

I'm not sure I'd rush to go back to the safari but I enjoyed my night.  I was surprised by how long we were actually in there for, partly as I said because it was bigger than I realised.  Definitely one to visit but perhaps not on the same day you do the zoo.

Restaurants and gift shops are open from 6pm