A Little Piece of the Orient in Kew

The weekend before last was a Bank Holiday one in the UK (the last one before the Christmas holidays for my family and friends).  Coincidentally Singapore had a holiday for Hari Raya Puasa celebrating the end of Ramadan on the Tuesday after and Presidential elections were held on the Saturday of that weekend.  The elections meant a holiday in lieu and in the case of the company my fiance works for he was given the Monday off as well.  I admit I was a little disappointed to be in the UK whilst he was in Singapore as, had I been there, we may well have taken the opportunity with a long weekend to go for a last minute break somewhere new.  However given I'm currently in the UK there was not much I could do so dismissed that disappointment to carry on with the wedding organising. 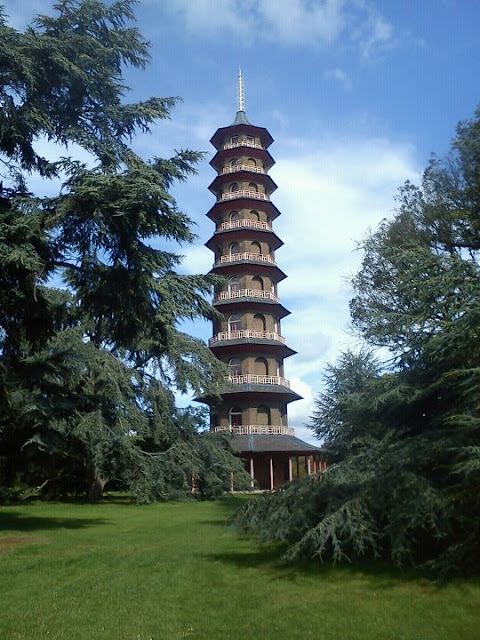 What I did not realise was that on a whim my fiance had decided to fly back to the UK to spend the longer weekend (in his case) with me!  The first I knew of it was when I got up on the Saturday morning (UK time) to a text message he had sent a few hours previously from Dubai advising me of what he was doing.  By this point he was already back in the air and headed to the UK so all I could do was sit and wait for him to arrive.﻿

Understandably he was pretty exhausted when he arrived so we spent that night at my parents (where I'm currently staying) and on the Sunday headed up to London to stay close to the area where we were living before we moved to Singapore.  A stone's throw from there is Kew and Kew Gardens, somewhere I last visited as a teenager when, to be honest, I really was not that interested in the place.  We never went in the whole year we lived near there so decided that it would be a nice thing to do.

Unlike the Botanic Gardens in Singapore you have to pay to go into Kew's and it is not a cheap day out but it is a lovely place to wander around.  Of course most of the plants and trees in the main grounds are more suited to the climate in the UK but there are also several Victorian glasshouses which house more exotic plants.  The gate we entered in by (Lion Gate) brought us close by the pagoda in my photo above.  The pagoda is a ten-storey octagonal structure which was completed in 1762.  This whole area of the gardens is devoted to East Asia and has a very Japanese feel to it.  There is a beautiful Japanese style gateway and gardens in a typically tranquil style.  The gardens also include a desert area, a Mediterranean area and an Alpine rocky area amongst many others.

In the Palm House (one of several glasshouses and other buildings housing plants not so suited to the climate of the UK) it was just like stepping briefly into the humidity I'm used to experiencing when in Singapore.  Although the majority of the plants in there were from South America and Africa.  As soon as you walked in there was a sign advising that it was 28 degrees but that it felt hotter due to it being dripping wet (welcome to our world)!  By the time we left I was glad to be back in the more temperate late August UK weather.  However in my defence I was wearing jeans, socks and boots - not my usual attire when experiencing those levels of humidity.

Kew also has a Treetop Walkway which reminded me a little of the treetop walkway in MacRitchie Reservoir.  This treetop walk was only 18 metres high though and the structure felt a little more secure than the one we went on in Singapore.  Although not as high it still gave some great views over the gardens and the surrounding area of London.

A lovely day and weekend thanks to my fiance's insanely wonderful spur of the moment decision and great to have a little taster of Singapore whilst back in the UK.
Email Post
Labels: Botanic Gardens elections flowers Hari Raya Puasa Kew London MacRitchie Reservoir Maidstone parks and gardens photos places to visit random Richmond trips UK walking weather wedding