Earlier this week I spent the afternoon at Fort Canning park with a lovely fellow expat I've recently made contact with.  Natasha also writes a blog of her experiences since she moved here and I'd definitely recommend you take a look, http://livinginsingcity.wordpress.com/

I have been to the park previously but this was when I visited Singapore for two weeks in January so it was nice to visit again now I've been here longer. 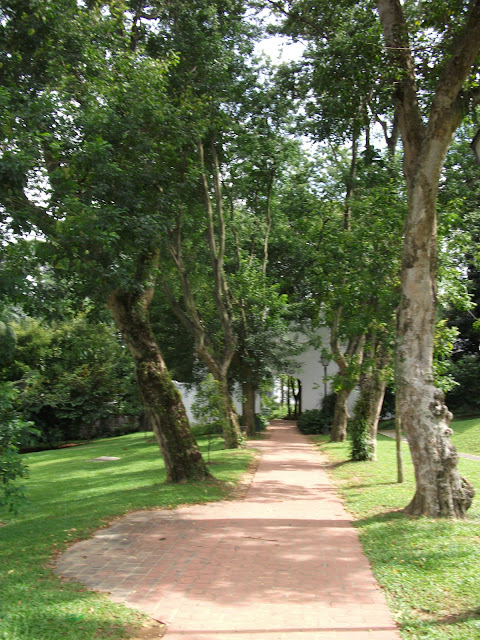 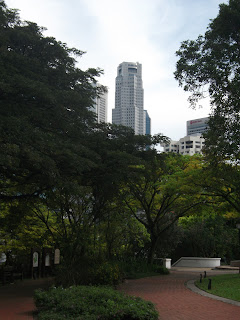 The park is another example of just how green and lush Singapore as a city is, this park being right in the heart it.  Just as when you are at the Botanical gardens it's hard to believe the hustle and bustle of a city is so close by.  Apart from the obvious clues like the towering buildings of the Central Business District beyond the park boundaries.

The hill where the park stands was originally known as Bukit Larangan (Forbidden Hill) and one of the five ancient Malay kings of Singapura, Sultan Iskandar Shah is said to be buried here.  When the British arrived they built a residence on the summit for the governor which was then replaced in 1859 by a fort.  There are also the remnants of an early European cemetery in the park which can be seen in my photo below.

It now makes for a very pleasant escape and when we visited there was hardly anybody else around.  Apart from a couple hosting their wedding reception in one of the park's buildings.  As you wander around you can take in various trees and shrubs with many different types of spices and also take a look at the site of an archaeological dig which houses Javanese artifacts from the 14th century Majapahit empire.  Having done a little investigation I understand that the Majapahit empire was a vast empire based on the island of Java from 1293 to approximately 1500.  During this time they conquered much of South East Asia which included present day Singapore. 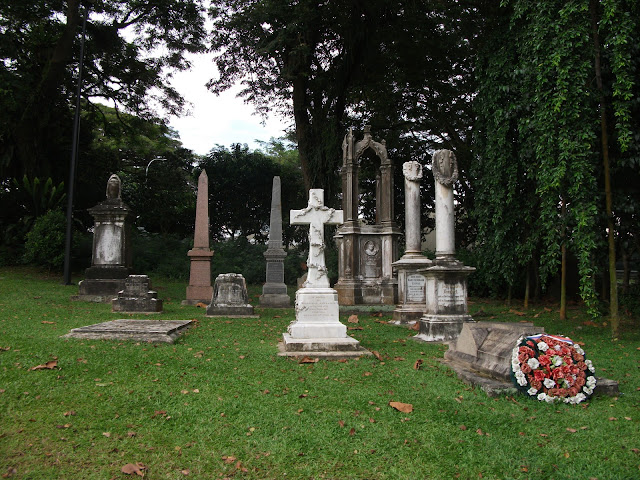 ﻿Away from the historical interest in the park another little thing that I found intriguing was that at one entrance there were escalators exactly like you'd find in a shopping centre but built into the side of the hill.  So on either side of you as you travelled up or down was the grass bank of the park, you don't see anything like that in the UK!

On maps at least the park looks to cover a fairly large area and I'm sure I've only scratched the surface so I guess that gives me opportunity to make a return visit before long.
Email Post
Labels: cemetery Central Business District CBD Fort Canning Park history parks and gardens photos places to visit Singapore walking
Location: Canning Rise, Singapore