When we first moved to Singapore the Tanjong Pagar railway station was still open with a train service linking Singapore and Malaysia. The station closed in June 2011, having opened in 1932, and I recall at the time of its closure there being lots of interest in the station and what would become of the building. Sadly I never got to travel on the railway when it was in use, nor did I get to take it on its final journey, though I know several people who did. After its closure I passed by the art deco building many times and wondered what would become of it. Lots of rumours and suggestions circulated but nothing concrete seemed to happen until earlier this year (I think in time for Chinese New Year) it was announced that the station would be opened to visitors on Public Holidays. As a lover of history and also abandoned buildings that seem to have stories to share this instantly went on my list as somewhere I had to get to on one of the numerous holidays.

We decided to wait a couple of Public Holidays before heading down there and finally went not so long ago. In case you didn't know it's free to enter and then you can spend as little or as much time as you want exploring the place. The day we went it was not excessively busy and there were a mix of families, photographers with some impressive gear making the most of the backdrop to do photography shoots of the buildings and site or with their latest muse in place.

When you enter the station you first go into the large airy ticket hall with its high vaulted ceiling and quite beautiful murals high above you. The murals depict various economic activities including rice planting and shipping activities. As I said I never got here whilst it was an operating station but I imagine this being a hive of activity, full of people about to embark on their journeys and others waiting to meet loved ones and friends. The signage is still up for places like the station police office and the office for the Ministry of Tourism and Culture. Off to the sides of the main halls are a few rooms, now empty but once upon a time no doubt teeming with life. I don't know what happened in these rooms but I imagine maybe a waiting room, various eateries, a lost and found office and so on, all the essential parts of any busy terminus station.

The platforms in some aspects seem (I guess) to have been left as they were at the time of the station's closure. Although I was also a little disappointed that none of the platform signage indicating you were arriving in Singapore (which I assume there must have been) had been left. In contrast though the platform shops seemed simply to have been closed up with their signage still clearly on display. I wonder where the people who owned, ran or worked in these shops ended up or where those shops moved to. The platforms too have a collection of small rooms, some of which are open, some not. Again I guess these were booths for station staff, eateries, toilets perhaps (a few still had sinks attached to the walls) and one booth that must have been an immigration point as there were still signs up requesting passports. Seeing all these abandoned rooms and sections of the station I couldn't help but think more about all the people that must have past through it over the years and wonder what their stories were. 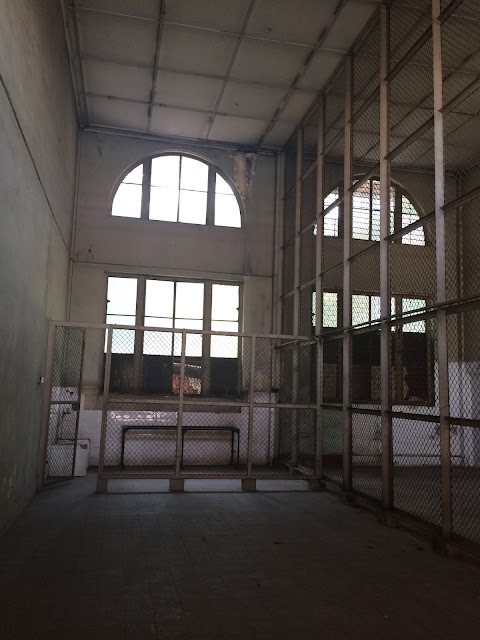 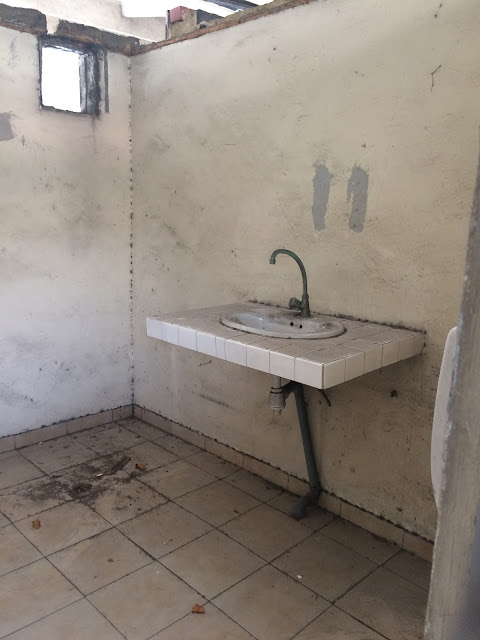 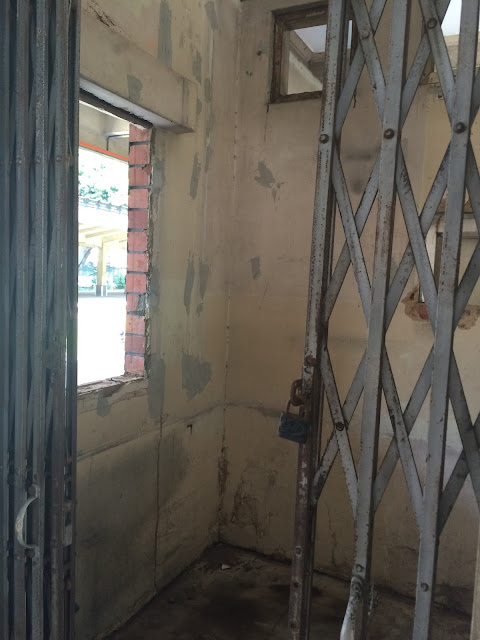 Once you are out on the platforms you can walk the full length of both sides. The platforms are a substantial length, long enough apparently to accommodate long mail trains. Of course now the majority of the track has been removed and grass has grown over the open space. But closer towards the station buildings track still remains and provides great photo opportunities. It is strangely fun to stand in the middle of a railway track, something you would never normally be able to do, even if you do know that no trains will be coming into the station.

We walked down the one platform almost to the end and then back up on the other one towards the main station. On this far side one you also get to see a little bit of some railway sidings and track that have also been left. We left via the main station building taking in again for one last time the beautiful high ceiling and amazing murals. 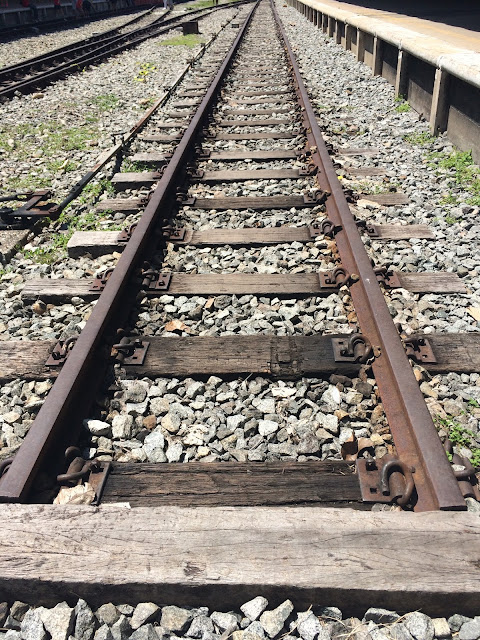 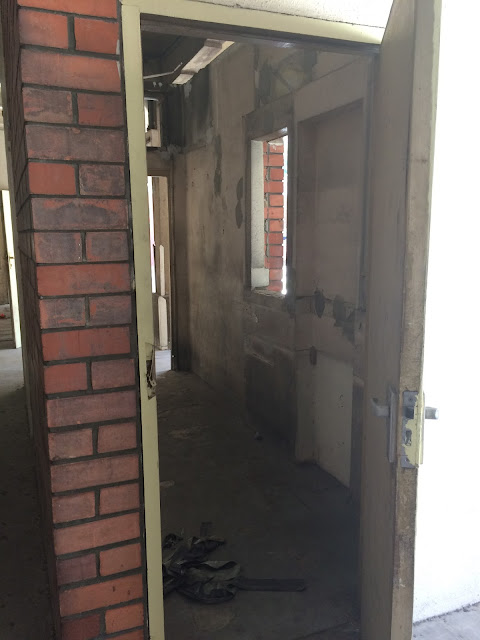 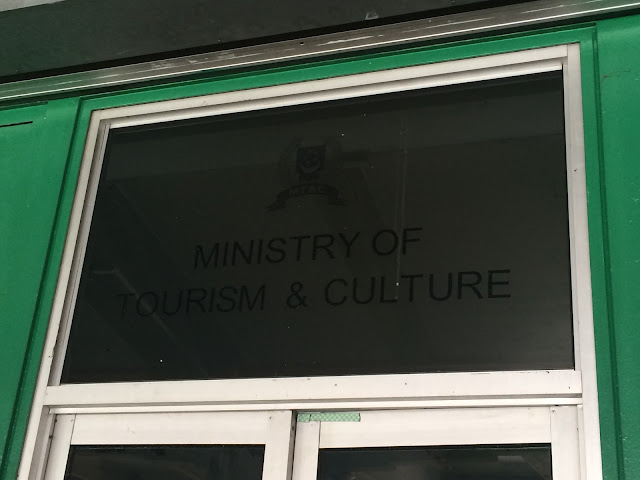 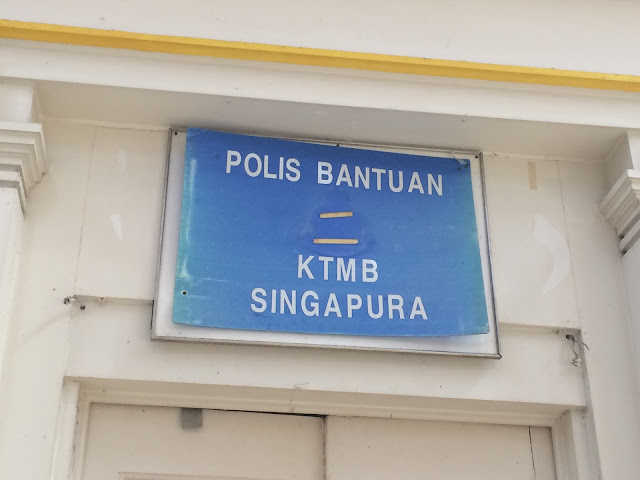 It was a fantastic way to spend our holiday morning and I really recommend that you take the chance to visit the railway on one of Singapore's many Public Holidays when it is open. It's a great opportunity to see a little bit of Singapore's past that is usually off limits to the general public. For me it was amazing to be able to see these now abandoned places that were once such a hub of life. I couldn't help but imagine all the stories these buildings could tell if only they could talk.

Only this past week, as I've been finishing this post, I've actually been reading that parts of the station platforms will, in the future, be making way for the construction of the next sections of the Circle Line. Whilst they are looking at ways of preserving the platforms, as the buildings and parts of the platform were previously gazetted as national monuments, who knows whether this may, in time, limit chances to visit this site. I'm so glad I've had the chance to see the station now even if I never got to experience it whilst it was in use.