Along with my husband (who has been to many) I attended my first proper football match recently.  As my husband is also a much bigger and far more knowledgeable fan than I will ever be I've handed the reins yet again to him to share a little of our experience.


On Saturday 15th November we attended a football match at Jalan Besar stadium (the original stadium opening in 1929), the Liverpool Masters, featuring a selection of players from days of old, including Robbie Fowler (aka God), Patrik Berger and Jerzy Dudek (Champions League hero from 2005) played the Singapore Masters (including the current head coach of the LionsXII in the Malaysian Super League, Fandi Ahmad). This was the first match I’d been to since watching Fulham play Everton (a free ticket from a friend that worked at Barclays at the time) on a freezing cold February day in 2008. Prior to that my last Liverpool match was also at Craven Cottage in 2002 (a couple of the Masters played in that game too).

We were sat in the covered part of the stadium, a good thing as the heavens opened just as we were arriving (which is very convenient for Lavender MRT (East-West line) and made our way to some free seats (there were not numbered seats) just above and to the right of one of the goals.

Events kicked off at around 7:30pm, although there had been a juniors tournament earlier in the day, with a line-up of the teams and the game comprising of two thirty-five minute halves. For the first half the Liverpool heroes were kicking towards the goal we were sat near and it didn’t take long before the silky Premier League skills were on display with a series of crisp attacking moves down either flank. The years were rolled back for me as the pass sequence went from Fowler to Steve Mcmanaman and back (how many times in the past had those two linked up) and before too long the resplendent reds were in front with a nicely worked goal. Emile Heskey (an eleven million quid signing for the reds back in the day) slid in to connect with a score from Jari Litmanen, a player that scored twice in that 2002 game with Fulham (the cold February wind whipping off the Thames making a half time pie a necessity). The crowd went wild, most fans were supporting both teams (Liverpool in red and Singapore in blue), as the rain continued to fall. 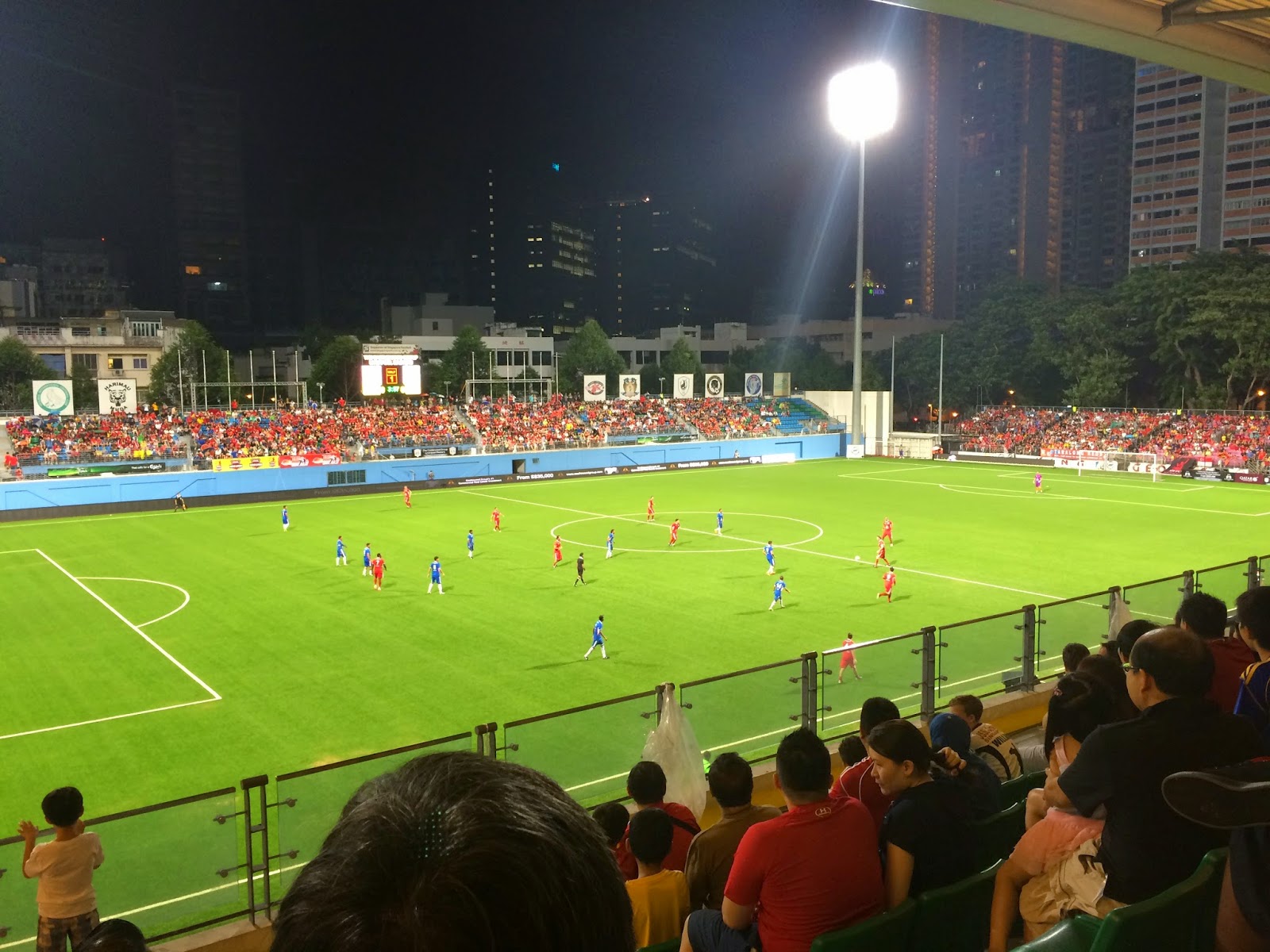 Shortly afterwards it was two nil, unfortunately this time due to an own goal in Liverpool's favour. As the defensive quality of the former Premier League players started to show through attacking options for the hosts were limited but the score was kept down to two at half-time. As the rain eased the second half started in the same vein as the first thirty-five minutes. The Liverpool team added a third, from the boot of Jari Litmanen (the provider of the first goal) and hit the woodwork on a number of occasions. The Singapore team showed more attacking intent as the game grew into its latter stages, forcing a number of quality saves from the hero of Istanbul 2005 (Liverpool’s fifth European title), Jerzy Dudek. They eventually scored (Rafi Ali being the man to do it) to make it 3-1.

For the last ten minutes the superhero striker, Ian Rush, came on to perhaps the loudest cheer of the entire evening. He showed that he’d lost none of the predatory instinct, making a few quality runs in the same way that terrorised many a defence in the 80s and 90s. 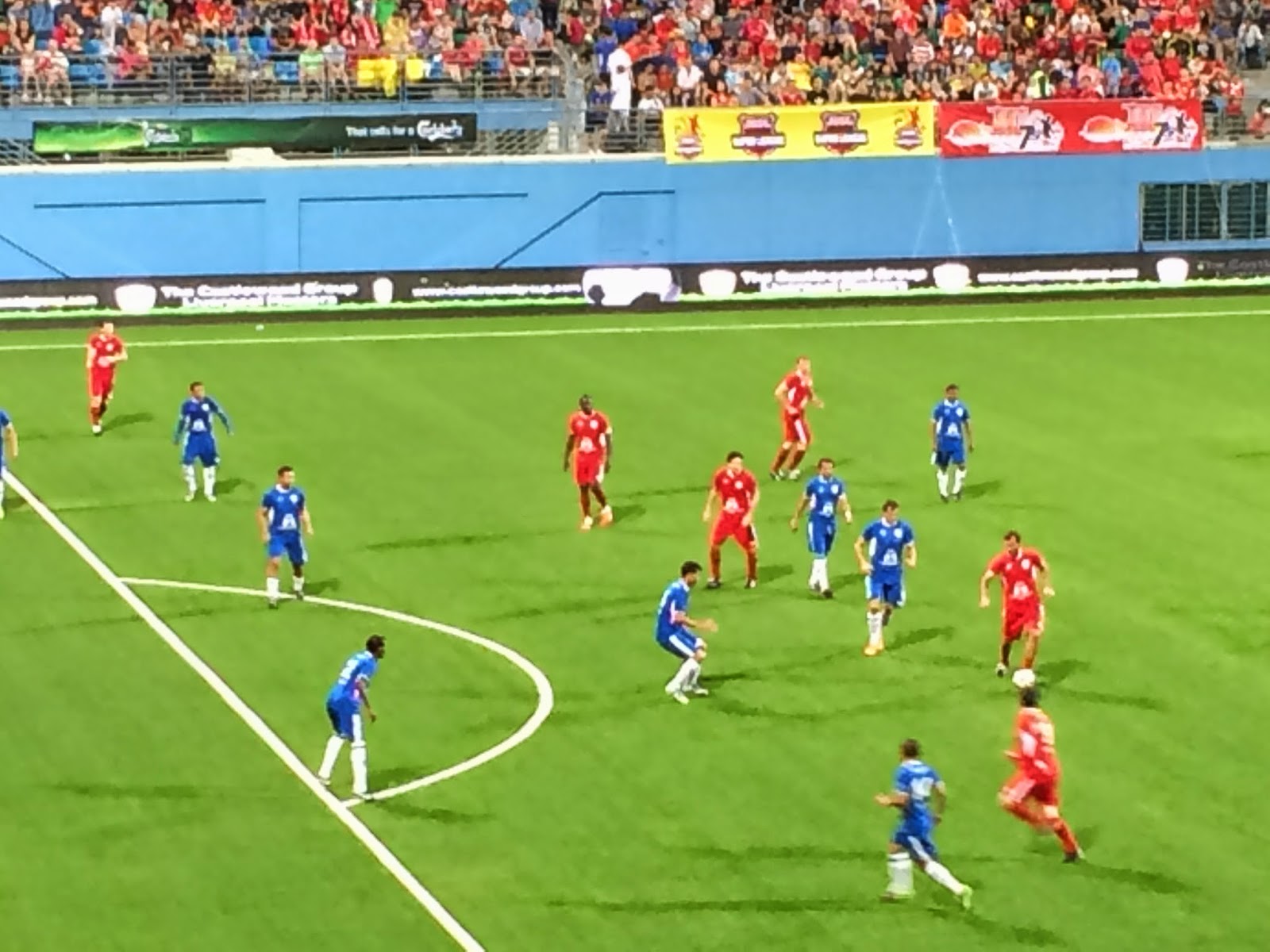 The game ended 3-1, and was followed by a brief trophy ceremony and celebratory photo sessions. We don’t get to watch live football on anything but the telly often in Singapore, so this game was brilliant with a truly authentic atmosphere (very similar to Anfield, complete with the dulcet tones of You’ll Never Walk Alone).

A pleasant night and as the rain had stopped, we could finish our evening by making our way to drinks with friends in Little India.