My husband has been busy writing for my blog again, this time with a post about a few of his experiences on some of the different airlines we have used.

As an expat with family commitments in the United Kingdom I travel back on a regular basis, perhaps three or four times a year.  Therefore over the last five or so years I have travelled on many airline and route combinations, ranging from the direct and convenient but expensive services of Singapore Airlines and British Airways to services connecting in the Middle East (Emirates and Qatar). There are many many airlines plying the route between Singapore and Europe, with vast differences in cost and service.  I’d suggest utilising a booking website and keeping an eye out for the best offers and being prepared to be flexible, for example, flying to London and buying a separate ticket on another airline or hiring a car is often significantly cheaper than flying to a regional airport.

The very first time I went back to the UK after moving to Singapore I managed to find a reasonably priced fare on Singapore Airlines to London (these are very rare as SQ is often the most expensive provider on the route). My memory is relatively sketchy through the mists of time but I remember the fare was approximately fourteen hundred bucks (it must be noted that on discounted fares the airline awards a miserly amount of frequent flyer miles). The airline flies to London five times a day using a mixture of the fabulous Airbus A380 (they were ‘first to fly’ the type) and Boeing 777s. The intercontinental food service in economy is OK at best (regionally around Asia I avoid eating on SQ as the food is just awful, apart from the rock solid ice cream on flights to Bangkok), the seats on the 380 are comfortable (the best seat in economy is on the 380 configured with economy upstairs, very very quiet) and the entertainment options are standard (and excellent) for this day and age. However the flight is very long and very boring, I have often been flying over India and exclaimed / sighed that there is still five and a half hours to Singapore.

I have also travelled back on British Airways (and before I go on I will admit a degree of bias towards a former employer), with the airline using rather tired old Boeing 747-400s and newer Boeing 777s on the route. I was seated in the emergency access row and had plenty of legroom on the flight to London, this was not the case on the way back, but as a short-arse this is not a problem for me. The seats are standard with adequate in-flight entertainment on-board the older aeroplanes (BA have just introduced the best looking A380 on the route, so things will improve) and great food. The service from the cabin crew was outstanding, understated and efficient (the provision of the necessary gin and tonic was prompt) and the flight smooth. When we took this flight it arrived (and departed from) at the Heathrow Terminal 3 hell hole but this has since changed to Terminal 5 after the unravelling of the joint service agreement with Qantas (the owner of this blog flew Qantas with no in-flight entertainment for 12plus hours, must have been awful) and hence there is a significantly improved airport experience in London.

Much of my flying between the countries has been on Emirates (both in Economy and Business Class, but here we will only talk about economy, keeping it real). The real advantage of Emirates to the UK is that as well as Heathrow they fly to many other regional airports, therefore allowing the passenger to tailor travel plans to activities within Blighty, for example, on one trip we flew into Manchester and out of Glasgow (I had been at a conference in Edinburgh). Additionally, I prefer the fact that there is a break in the middle of the journey in Dubai, giving a chance to wander around, grab a coffee or a beer (or a shower when I had my gold status, long since expired), which I find much more relaxing. From Singapore the airline uses a mixture of A380s (economy is on the main deck with first and business on the upper deck with the excellent stand-up bar) and Boeing 777s. There are five flights per day from Singapore to Dubai, with the only one to avoid being EK349 / EK 348 which is via Colombo in Sri Lanka (9+ hours). Dependent on destination in the UK Emirates uses A380s and 777s (Heathrow and Manchester get the big bird). So the flights, the seats on either aeroplane are good in economy (the cabin to sit in is the front cabin on the main deck of the Airbus, as it’s very quiet and reasonably small), with good entertainment options and great food (this has massively improved over the last couple of years or so), we live in hope of receiving the Middle Eastern mezze platter (alas it’s been a long time). As for Dubai, as a connecting airport, it is clean, efficient with many eating options (additionally the call to prayer as the hot desert sun rises is mesmerising and exotic). Finally, the business class lounges (if you are lucky enough to have access) are truly excellent, please pass the Moet et Chandon. 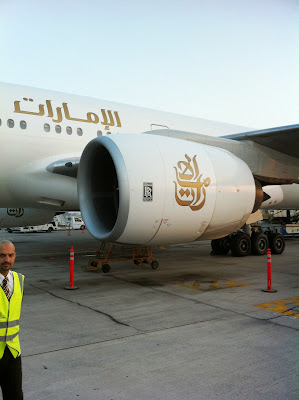 More recently, and based purely on price, we have shifted to flying to Europe via Doha and Qatar Airways. The airline flies to Heathrow and Manchester in the UK (shortly to add a Boeing 787 service to Edinburgh) with a couple of flights a day from Singapore to the new and excellent airport in Doha (there is a moving dinosaur in the terminal), using a mixture of Boeing 777 and 787s. From Doha to London the airline uses their brand spanking new Airbus A380 and Boeing 777s. When we flew from London the aircraft was an old Airbus A340-600, with poor seats and rubbish in-flight retail. However, the food was excellent covering a light snack and a full on meal prior to landing with the drinks trolley including champagne (we didn’t have any so I am not sure if it is extra money). From Doha to Singapore the airline flies the new 787, with new seats, new in flight entertainment and funky window shades. The aircraft is very quiet and relaxing. Qatar gives you the opportunity to earn OneWorld miles that are redeemable on over ten global airlines including British Airways, Cathay Pacific, American or Malaysian Airlines. 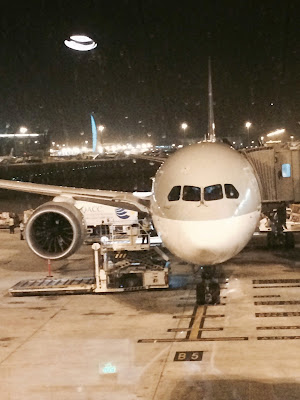 There are, of course, many other connecting options, including Malaysian via KL, Lutfhansa through Frankfurt, Cathay via Hong Kong.  Which do you prefer?