Despite having just been back to the UK for Christmas I still (unbelievably) have one more part of my summer trip to share!  My blog resolution for 2014 undoubtedly is to be more prompt in my blog postings.  By the way I won't be sharing any of my latest trip back, just because it was mainly spent with family doing all those typically Christmas things and was only a relatively brief visit.  It was lovely nonetheless.

So the final part of my tour of the UK in the summer was to go back up north to Edinburgh.  For the final week of our trip my husband was on a work conference there so I spent the first few days of that week with my family and then travelled up the day before (my husband's birthday) our flights out from Glasgow back to Singapore.  Edinburgh is a place I've been to many times and is undoubtedly a fabulous city. Obviously this was a very brief visit so we didn't get to do much but it was an enjoyable way to end our trip.

I travelled up to Edinburgh by train from London.  Something I've done previously and had made a conscious decision to do this time rather than taking a flight up.  The views as you travel up through the north east of England are beautiful and as you cross over into Scotland the train line travels parallel to the coast, again providing you with some beautiful scenery.  If you have the time to do it I'd definitely recommend travelling up this way.  A flight is obviously quicker but the train journey is only approximately four and a half hours direct and if you book your ticket in advance you can get a decent price and reserve a seat.  Always a good idea as the trains on these main routes across country can get busy.

Personally I like the fact you can just arrive at Kings Cross, London to go to Edinburgh (or any train station when you are travelling by train to places), get on the train and go rather than having to get there so long before travelling to check in, go through security etc. as you do with flying. Whilst I don't mind flying I have to admit I don't enjoy all of that beforehand.  I actually quite enjoy travelling to places by train and as I have no choice but to travel on planes most of the time it's nice to have the opportunity to go by another means sometimes if I can.  My husband was, of course, on his conference that day as well so I planned to catch a train which got me to Edinburgh late afternoon to meet me once he'd finished so we could go back to the hotel.

As I mentioned it was my husband's birthday and so we had planned to go to a restaurant for a meal.  A few places were suggested but in the end we went to the Jamie's Italian in Edinburgh. We've been to the one in Brighton before and I've always enjoyed the food.  We've yet to try out the one here in Singapore and I've seen mixed reviews but certainly in the UK the restaurants are fun and affordable.  I particularly enjoyed my starter which was the seasonal vegetable crudites on ice served with a mint and lemon yoghurt.  The vegetables were fresh and the yoghurt a refreshing accompaniment, I certainly felt very healthy choosing that one.  We enjoyed a good meal and good company, what more could you want for a birthday dinner? 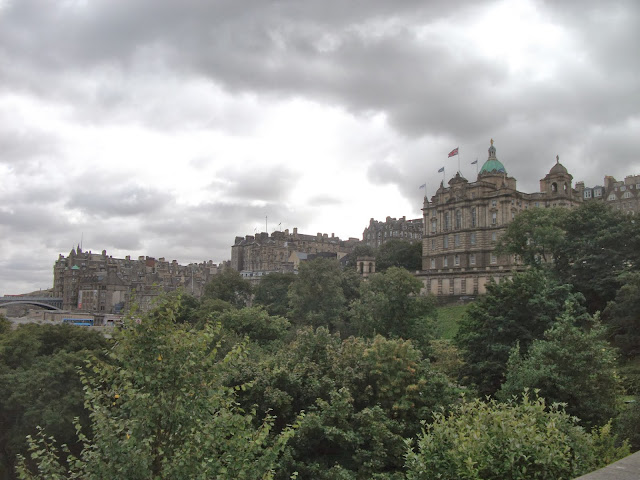 Our flight back to Singapore was in the evening the following day so we had the morning to do a little wandering around Edinburgh (and a little last minute shopping) before making our way across to Glasgow.  We went for a walk in Princes Street gardens to begin with but as the skies looked like it might be about to rain we decided an indoor activity would be best.  So we decided to go into the Scottish National Gallery which is very close to the gardens. 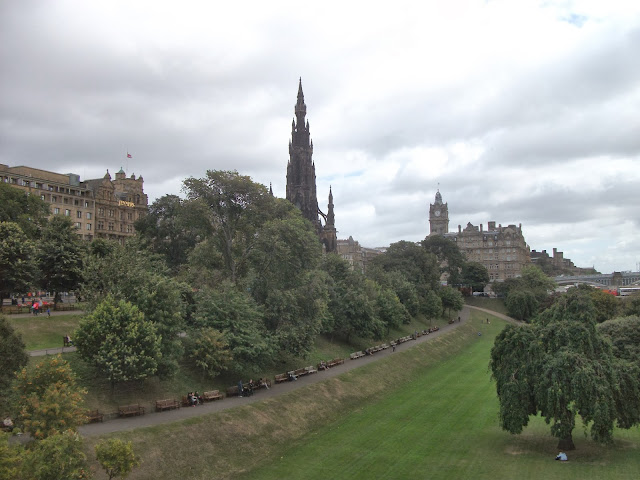 I really had no idea what artwork was there beforehand but have to say I was really impressed, best of all and like so many art galleries and museums in the UK it's free to enter.  The gallery houses the Scottish National Collection of fine art spanning the period from the early Renaissance to the end of the nineteenth century.  A highlight for me was that we were lucky enough to see Rodin's The Kiss which is currently on loan to the gallery from Tate Britain, we had no idea that was the case until we went in.  According to the gallery's website it will only be there until the 2nd February, so if you are in Edinburgh get there soon to see it.  Besides this there are pieces by Botticelli, John Constable, Thomas Gainsborough, Rubens, Rembrandt and many more artists from across Europe.  Of course there is also a selection of paintings depicting the beautiful Scottish countryside as well as portraits of notable people from Scottish history many of which were painted by Scottish artists.  We spent an interesting morning there wandering around and admiring the pieces.

All too soon though it was time to make our way to Glasgow for our flight back to Singapore.  I'd have loved just a little bit longer back in Edinburgh as despite being there several times there are still things I've not managed to do that I would like.  Hopefully we'll get back there again before long so I can.
Email Post
Labels: art birthday castle Edinburgh exhibitions history parks and gardens photos places to visit restaurant Scotland things to see train journey travel trips UK walking weather
Location: Edinburgh, City of Edinburgh, UK