After a lovely week in the Lake District we then spent a few days with my husband's family in Southport, whilst there we decided to take a day trip to Chester.  I've been to Chester a couple of times before, the first time was when I was in my early teens and I think the last time was on a friend's hen weekend when I was in my mid-twenties.  We had a great weekend then visiting the zoo, eating, drinking, dancing and finally crashing all together in her friend's very convenient house close to the city centre!  Chester is, in my opinion, a lovely city full of history and great shops (though I didn't go in any of those this time) so well worth the trip and luckily not too far away from my in-laws.

Our visit focused on a walk around the city walls which date from Roman times.  Whilst we were on our walk we were able to see the Roman amphitheatre, Chester castle, Chester cathedral, managed to divert off the wall to stop for lunch and refreshments and also saw Chester racecourse.  Chester has a rich history dating from Roman times onwards having originally been founded as a fortress by the Romans as they expanded their empire northwards.  The remains of Roman Chester and the Chester of other time periods are easily found throughout the city.

As I mentioned above the city walls date from Roman times and were built to protect Chester.  The walls were later extended during Medieval times to form a complete circuit of the city.  At the end of the Civil War the walls were no longer maintained for defensive purposes but became of leisure and recreational interest instead.  Walking the walls is a pleasant way to view the city and also a very easy walk.  There are plenty of points where you can come off the walls if you do need or want to and you can walk as fast or slow and as far as you wish.

Towards the end of our walk we came to the Eastgate clock.  It is said to be the most photographed clock in the UK after Big Ben.  I don't know if that's true or not but I've added to the number of photos taken of it I guess!  The clock stands on the site of the original entrance to the Roman fortress of Deva Victrix.  In case you had not realised the gate (the present one dating from 1768) is the Eastgate which joins these parts of the city wall.  It gives you great views over the busy city centre streets and allows you to pause and take your time people watching for a while.  What makes the walls even lovelier (in my opinion) is the number of little shops built into the walls or with an entrance from the wall.  It fascinated me to think about what shops and businesses may have been run in these spaces in years gone by.

It was lovely to be back in Chester again after quite a few (and perhaps too many) years.  Our walk around the walls was fun, interesting and let us see a lot of the main parts of the city too.  If you ever find yourself in this part of the UK I'd recommend visiting this city. 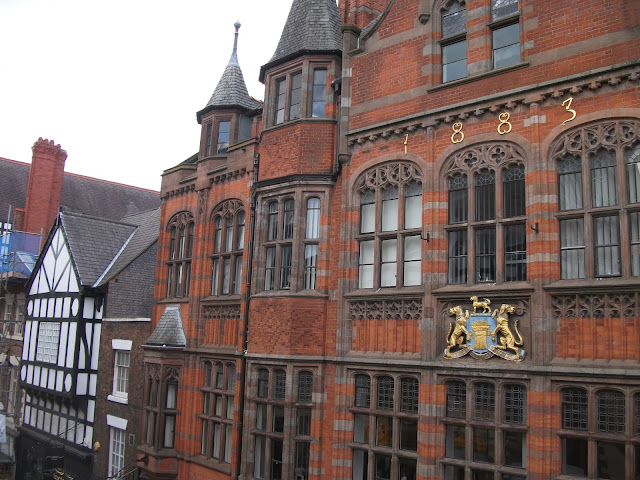