Oktoberfest is a massive occasion in Germany and you can now also celebrate it in your own way in Singapore by going along to Peranakan Place this September and October.

From the 17 September 2012 until 14 October 2012, the following outlets under Peranakan Place (Acid Bar, Alleybar, Outdoors Cafe & Bar) will be selling a variety of delicious Oktoberfest foods.  To add to the festivity, they have also specially flown in, 1L stein glasses for your enjoyment of Erdinger beer.

To kickstart the celebrations, on the 24 September 2012 and 25 September 2012 Alleybar will be organising Erdinger beer appreciation and tasting sessions.  The beers are being flown in especially from Erding, Germany and feature Alkoholfrei, Champs, Weissbier, Dunkel and Pikantus.  These sessions will include an introduction to Erdinger's brewery and the range of Erdinger products from representative Oliver Helbig.  The session also includes a tasting of portions of Erdingers as well as a hands on showcase of the perfect pour technique.

The beer appreciation event costs $45 nett per person or $40 nett for Peranakan Place Blackcard members.  It is limited to 40 persons per session, RSVP by the 14 September 2012 to events@peranakanplace.com with the following details: 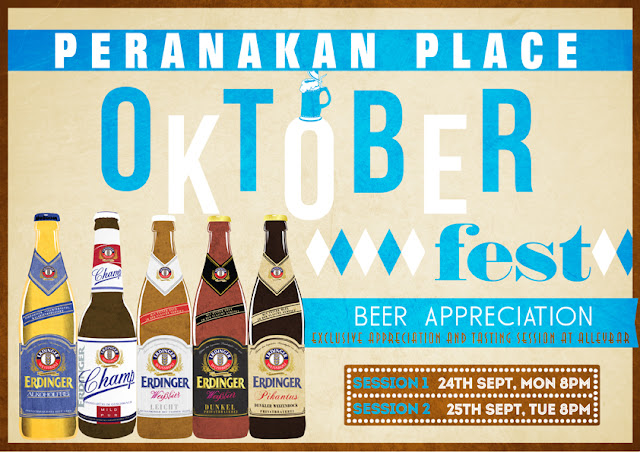 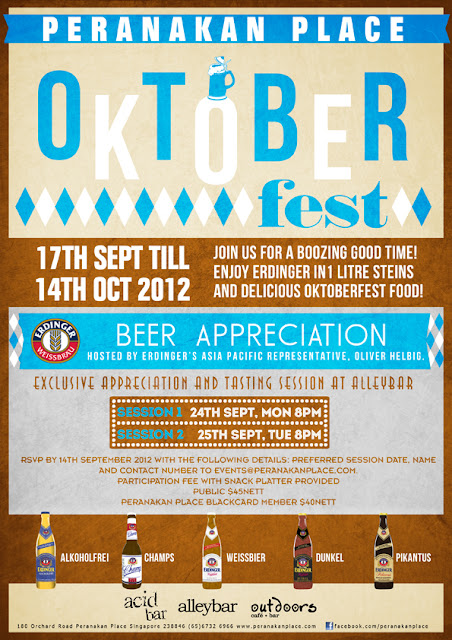 Oktoberfest At A Glance