Last Friday I was invited to go exploring around the Ramadan bazaars and markets at Geylang Serai.  Friday was the eve before the eve of Hari Raya Puasa, when the month of fasting for Ramadan comes to an end, so the bazaars and markets were full of people and much hustle and bustle.

This is my third Ramadan in Singapore and each year a temporary market appears (for the month of Ramadan) close to my home by Paya Lebar MRT station.  I've walked past it countless times and this year past it on many nights too on my way home from work.  By that time the market is seemingly at its most busiest and full of people buying and stall holders selling their wares, handing out leaflets to passers by and doing their best to attract trade.  Despite that though I've never ventured into the market before now.

We met our guide for the evening at the MRT station a little before sunset and immediately headed into the bazaar close to the station.  Here we were surrounded by stalls selling decorations for the home to celebrate Hari Raya, traditional Malay clothing for men and women, packets of savoury treats for sharing with family and friends and the traditional hats (or songkok) that the men wear.  I learnt from our guide that once a man has made the Hajj pilgrimage he is then entitled to wear a white version of these hats. 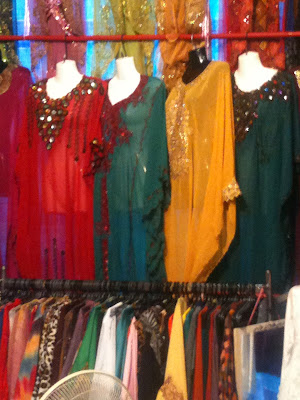 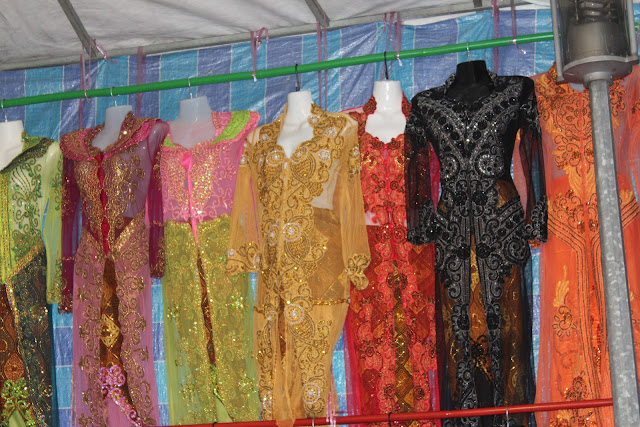 From the bazaar near to the MRT station we then walked towards the Joo Chiat complex area in amongst more stalls selling jewellery, highly decorated clothing, incense and furniture for the home.  As we made our way away from the market near the station the sun had just set and we heard the call to prayer confirming that the fasting for the day was officially over.  As we continued to wander the stalls many of the owners were to be seen enjoying an array of delicious looking dishes, whilst the restaurants and cafes were teeming with life.

Of course after all this walking we too needed something to eat and I was not to be disappointed.  We dined at a place called the Kampong Cafe on Joo Chiat Road, somewhere my husband and I have eaten at before and thoroughly enjoyed on our last visit.  Firstly we had a delicious mutton soup.  It was ever so slightly spicy and served with chunks of mutton perfectly cooked.  We were served bread with it as well in order to mop up the soup which was a must as you definitely didn't want to leave any of the delicious soup behind in the bowl.

After this we were served roti prata and chicken curry.  I've had roti prata before (actually at this very cafe I believe) and fell in love with it!  I could eat it everyday to be honest though I'm not sure it is necessarily the healthiest choice so perhaps I won't, but as an occasional treat it is delicious.  The chicken curry was also very good.  I tend to avoid chicken curry usually as the chicken often comes served on the bone.  I'm afraid being a lazy Westerner, and even two years down the line of being in Singapore, I still haven't got used to that so generally only order it if the menu says it is boneless.  I'm not put off by the bones it is just simply the effort of getting the meat off them.  Nonetheless though the curry was very good and worth those bones.


After our lovely meal we wandered around one further market and shopping area full with people browsing and buying goods.  By this point people were starting to burn offerings and lighting joss sticks on the roads for the Hungry Ghost festival which had also just begun.  In addition to the bustle as the end of Ramadan approached the night air was full of ash from the burning offerings.  A scene which reminded me once again of the many different cultural aspects and beliefs that are a daily part of life in Singapore.