Kampong Glam or the Arab Quarter as it is also known is an area of Singapore where traditionally the Malay and Arab communities lived.  This area along with amongst others Chinatown and Little India were parts of Singapore that, at the time of the colonisation of the island by Sir Stamford Raffles, were designated areas for the different communities to live.  It is an area that continues today to have a strong Malay and Arab influence and is well worth a visit.

The name, Kampong Glam is derived from two Malay words.  Kampong means village or settlement and from books I've read about Singapore there were at one time lots of Kampongs scattered all over the island and Glam (or Gelam) refers to a variety of eucalyptus that grew in the area. 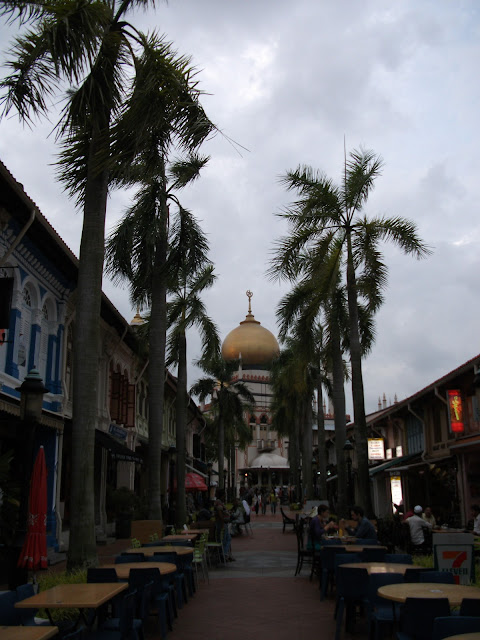 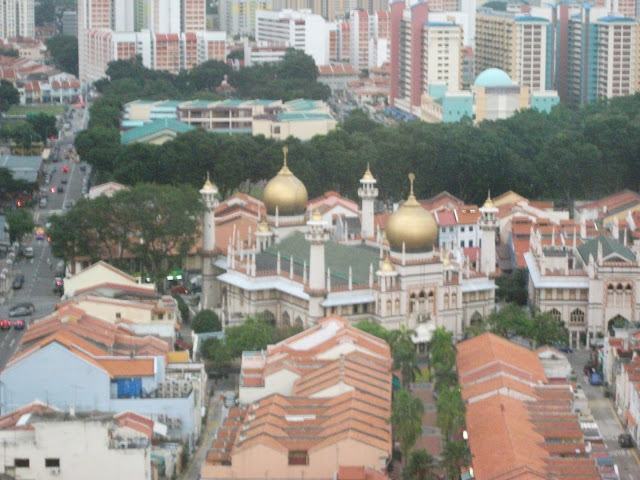 The area has tiny, narrow streets worthy of being visited which are full of shops and restaurants.  The photo above shows some of these streets.  Kampong Glam includes possibly one of the smallest streets in Singapore, Haji Lane.  It looks no more than a small side street at first glance but is definitely worth exploring for quirky, individual shops and restaurants.  There are also a lot of traditional textile and carpet shops scattered in the streets which are well worth investigating too.  Both these photos show the Sultan mosque, which is considered one of the most important mosques in Singapore and is certainly a very striking landmark of the area and easily spotted.  There is a palace here too, the Istana Kampong Glam, I've not been here but it now houses the Malay Heritage Centre.  So one for the 'to do' list I think.

Close by is possibly one of the best bars in Singapore.  It was certainly a great find when my fiance and I first arrived (we were residing in a hotel very near Kampong Glam and found it quite by chance on an evening walk).  I'd definitely suggest a trip to Blu Jaz, you can read more here Top 5 chill out bars in the Lion City but if you are looking for somewhere relaxed with live music (on certain nights) this is the place for you.  It always strikes me as a slightly bohemian place where artistic, trendy and cool Singaporeans (and others) hang out and somewhere a little more individual than a lot of the places in the city.

﻿This is an area I've not come to a great deal and consequently is somewhere I still need to explore more.  We've only eaten at a couple of restaurants here (apart from eating at Blu Jaz) and that was all some time ago now so we definitely do need to return soon!
Email Post
Labels: Bugis drinking food history Kampong Glam local food and drink photos places to visit restaurant shopping Singapore temples