Street Art and Shophouses of the Everton Road Area

With time going against me in the rundown to our departure date I knew I just had to pick out a couple of things that I wanted to try and do before we left. As part of my Red Dot Roaming posts and just generally I had an ongoing, ever increasing list of places etc. that interested me. One of these places on the Red Dot Roaming list was the Everton Road and Spottiswoode Park Road area (reasonably close to Outram Park MRT) which I'd read had some beautifully preserved shophouses and also some interesting street art in Everton Road and from my long list of places I chose this as an area I wanted to see.

Since going however, and unfortunately after I ran out of time in Singapore, I realised there are actually more murals than I saw on my visit, but I got a bit carried away on the day with the lovely shophouses and overlooked these - oops! I guess that just means I shall have to return to Singapore someday to catch up on what I missed. A search on the Internet though reveals countless photos and blogs of and about the mural I saw plus the one I didn't. They really are quite charming, all the more so as street art is quite a rare sight in Singapore. 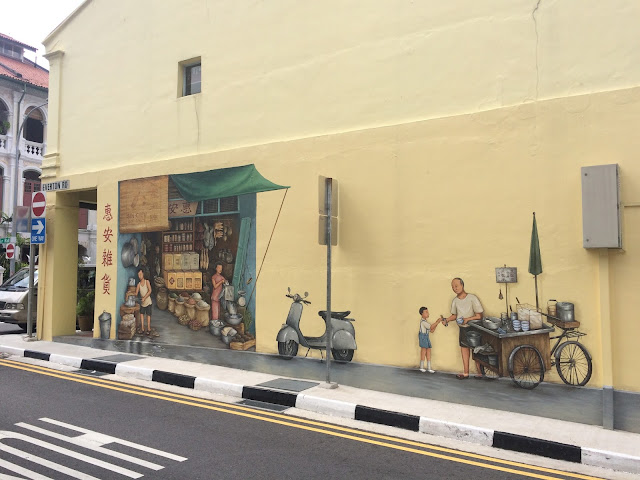 The murals were painted by a local who lives close to Everton Road and who was inspired by the murals in Kampong Glam. The artist's first mural was the one I missed, for this one he got the permission of the building's owner (the great-grandson of the original owner of the building in the photo below) to paint his mural and the results have been very popular with visitors. I can't quite believe though that I saw the building that it's painted on and took a photo of it because I liked the ghost signage but didn't see the mural! Anyway as I said they are obviously very popular, indeed on the day I visited there were two other people admiring the one I did see and taking lots of photos.

The murals depict scenes from Singapore's past, a very different place to the Singapore I know but one I'd have loved the opportunity to have seen if I'd been alive at a different time. The artist actually has his own website and you can read a lot more about the murals and the process of painting them (in particular the one I saw) here if you are interested. 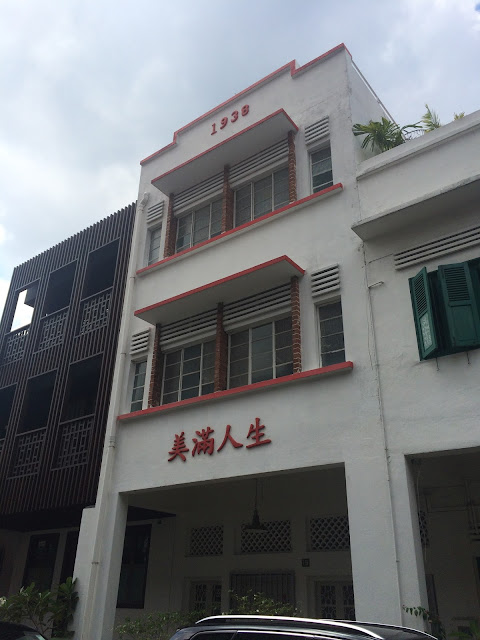 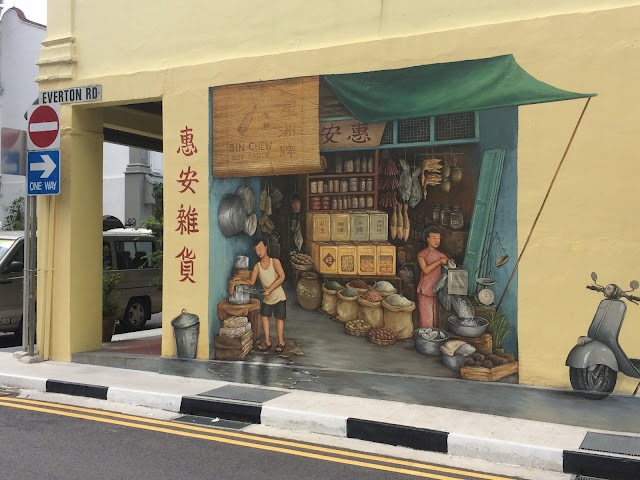 As I said, although I went to see the murals, I also got distracted by the beautiful shophouses in the area. Everton Road and Spottiswoode Park Road are absolutely overflowing with some gorgeous ones, I had not realised there were so many until I got there and they just kept coming and coming. Whilst I was visiting I then recalled reading previously about a shophouse on Spottiswoode Park Road whose second storey has the honour of having the oldest painted facade in Singapore (the building dates from the 1890s) but, of course, I hadn't remembered this beforehand so hadn't established which one it actually was before my visit! 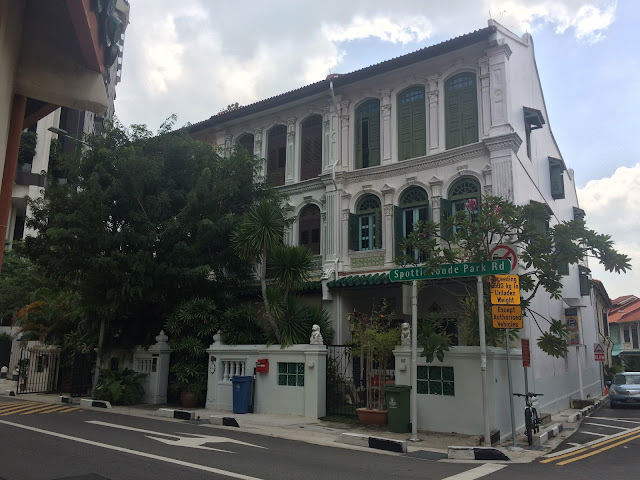 I'm not an expert at all on shophouse design, other than I think they all look beautiful, but there did appear to be some differences between them which I guess means they are of different ages and have different styles and influences. For example, some almost looked a little art deco in style. Of course shophouses tend to be beautifully decorated and these and the five-foot ways did not disappoint, lots of beautiful tiles, beautiful coloured exteriors and charming decoration on the exterior. Wandering around these couple of roads it has undeniably become a trendy spot and I'm sure a highly sort after area to live if you can. As I wandered into Blair Road directly across from Everton Road at the crossroads with Spottiswoode Park Road, at the far end I noticed a few shophouses had been converted into nice looking bars and cafes. I didn't stop to try any that day, but maybe if I do return to Singapore some day I'll have to check out what is there then. 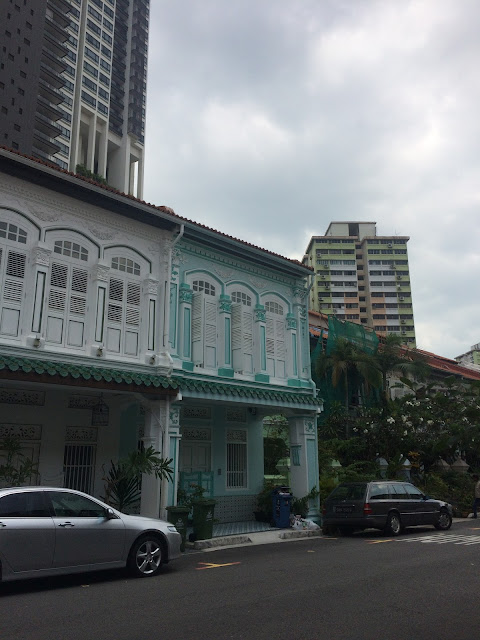 At the far end of Blair Road I came to this large open expanse of grass with some HDB's to the left. I was curious as to what this was and if you look at my photo below what the circular thing to the left is. I also wondered about the building frame over on the far side. I couldn't find anything out about the space and maybe it is just an open, undeveloped area but it was quite a pleasant and unexpected find at the end of the road.


As I walked back towards the MRT station again I noticed how the more modern buildings of the area such as the Pinnacle @ Duxton towered over the old shophouses. A contrast I've always quite liked. I also noticed the sweet letterbox design on one of the shophouses in the photo below. They also had some seats out the front with matching cushion covers. I'm glad I took the time out to go up there before I left to have a look at this quite lovely area. It's a shame I missed part of the murals I went to see but I guess that's all the more reason to return and maybe he'll have painted some more by then!