Fort Siloso and the Skywalk

Fort Siloso was one of the first places I visited when I moved to Singapore over five years ago but since that very early visit on a slightly rainy day which was also my first encounter with wild monkeys I've never returned. All that changed recently however which also meant I got to walk across the fairly newly opened Skywalk.

I did mention my first visit to Fort Siloso previously on my blog but this was only in passing in one of my very early posts from my first few months here. So now I think it's high time to make up for that properly! Fort Siloso is actually the only restored coastal gun battery from the twelve that originally made up 'Fortress Singapore' at the beginning of World War Two. A fort was first built here in 1874 when it became necessary to protect Singapore's port as trade flourished.

The fort went on to play a role in World War Two when the guns were turned inland from their usual position pointing out to sea to defend Singapore against the land invasion by the Japanese. During the subsequent Japanese occupation the fort was used as a Prisoner of War camp and after the Japanese surrender was used by the Royal Navy until it was handed over to the Singapore Government at the time of the British withdrawal from Singapore. 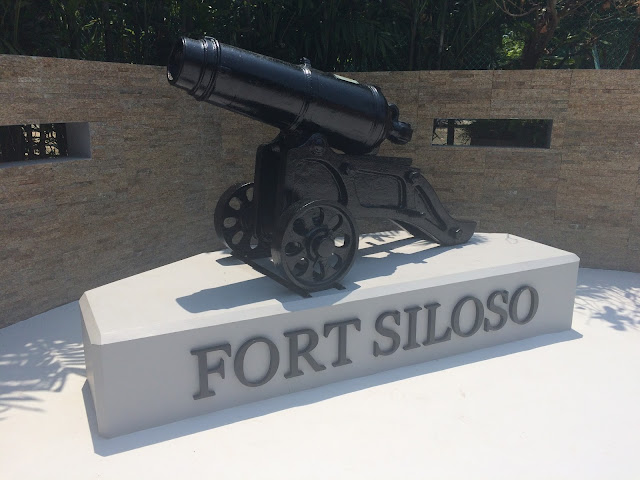 Now you can go and visit the fort for yourself and learn about its history. The information about the fort is nicely displayed in the various buildings and mainly focuses on its role during World War Two. Apart from a couple of parts which you do have to pay for it is completely free to explore. The displays consist of everything you'd expect with information boards, photos, pictures, videos and interactive sections. We visited mid-week and it was pretty much empty. The first time I visited was on a Sunday when you'd expect it to be a little busier but I don't recall there being many people there then either but perhaps this was because it was a rainy day. This little part of Sentosa is quite different from the rest of the island and if you are looking for something more than just the usual pursuits available here it is well worth stopping by. 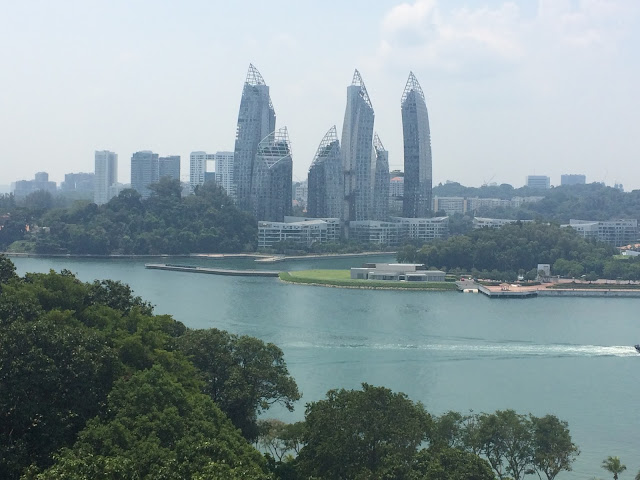 Of course, as I mentioned, we also got to walk on the new Skywalk which opened earlier this year and which you can now use to get to the fort. When you arrive at the Skywalk you take a lift (I think you can also take the stairs) up eleven storeys and when you step outside there is a great view from the treetops. Here you can see across Sentosa and back to the mainland, spy the cable car, spot some of the iconic condos in the area and, if nothing else, enjoy a pleasant breeze too.

Like lots of similar attractions when you first step out of the lift there is an area with a glass bottomed floor so you can stand on it and look down to the ground below. I couldn't resist taking the standard 'feet on the glass floor' photo when I was there. The actual walk then takes you at treetop height over parts of the fort and surrounding area, giving you an interesting bird's eye view of everything. The skywalk is also free and worth doing if you are going to visit Fort Siloso. 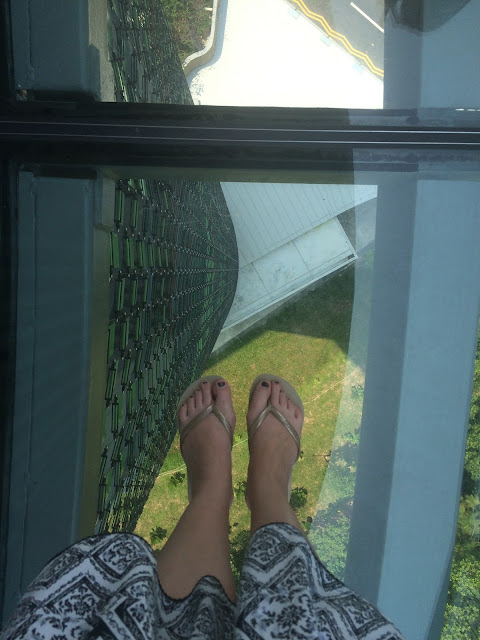 As I said this part of Sentosa is just a bit different from much of the rest of the island, maybe that's why it was relatively empty on both my visits? Either way though it is just as worthy of going to as the rest is and for those of you who write off the rest of the island then perhaps this is the bit you should be going to. It's great to see that this fort has been preserved and this important piece of Singapore's history is being shared.