It's been a while I know since my last Red Dot Roaming post but I managed to get to the next place of interest to me, the Punggol promenade nature walk. This is another stretch of the North Eastern Riverine Loop of which I've been to the Punggol Waterway park and the Sengkang Riverside park areas previously. If you are interested in exploring any of this part of Singapore check out this really handy guide produced by the National Parks and, of course, my previous posts!

This time though we got the LRT to Kadaloor station, the first time my husband had ever been on the LRT, and began our walk from there. We began not too far from the Lorong Halus Wetland park, somewhere else I would like to visit but something we decided, this time, to save for another day. As with so many of the walks and routes to explore in Singapore everything was beautifully sign posted and the paths well cared for, making it perfect for all the family to enjoy. We did make a slight error getting on to the walk and had to backtrack a little but we were soon on the right route and underway! If you decide to join the walk from Kadaloor LRT make sure you head under the bridge close to the building works and RiverParc Residence (rather than walk across it) to join the jogging and cycle path which will then take you around to the nature walk.


From this point we were then on the nature walk with the sea to our right. Throughout the whole walk the path was well defined with much of it being split between a cycle path and a footpath. As you can see from my photo below the first part was tree lined and really didn't feel much like Singapore. We visited on a Sunday but asides from a few runners, walkers and cyclists we hardly saw anybody until we reached the end of our walk. 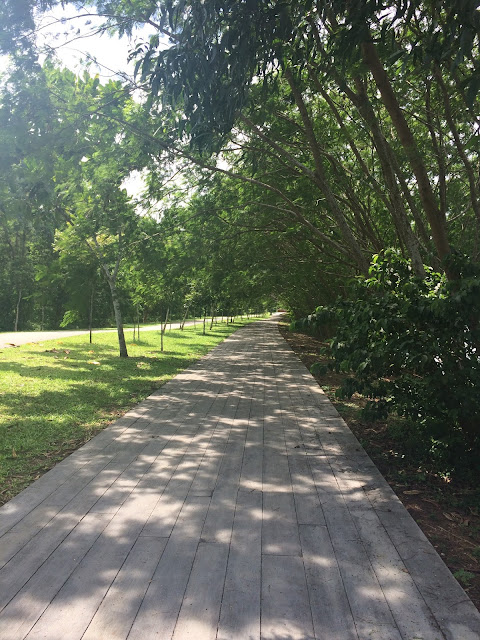 Before long though we left the initial tree lined walkway and were out in the open with very limited shade. Make sure you take plenty of water and wear plenty of sun cream! It is from this point that we could see Pulau Serangoon or Coney Island as it is also known, lying between Singapore and Pulau Ubin and another of the many islands off the coast of Singapore.

As you follow the walk around you pass two bridges connecting the island to the mainland but both have large gates restricting access. In the past I have read that you can get across to the island but I honestly don't know if we could have as it didn't look like it, needless to say we didn't try it. I've read that Pulau Serangoon has been earmarked for development with residential areas, areas for sport and recreational use and for a nature reserve. As I understand it some of this will be opening this year (not sure if it has yet), lets hope the residential plans etc. don't destroy the natural nature side of the island. 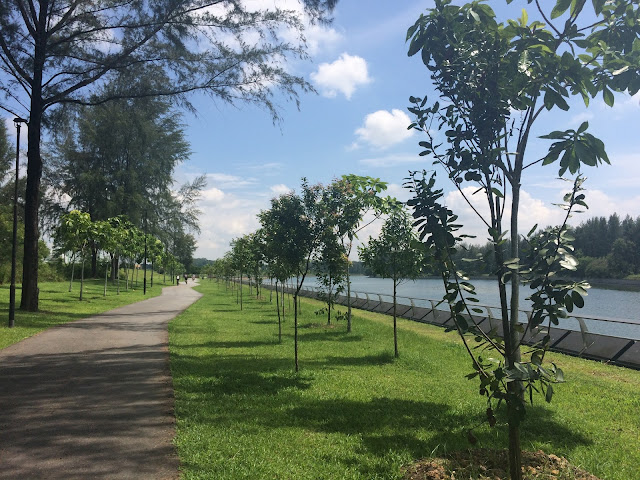 As we continued around we passed alongside the Serangoon West Dam which is the second connection between Pulau Serangoon and Singapore and from here across the water the edge of Pulau Ubin came into view and further on so did Malaysia. At this point we started to see more people as we came closer to Punggol Point and the Punggol Settlement. There were people fishing as well as walkers, cyclists and so on.

At the Punggol Settlement we were greeted by the welcome sight of a couple of convenience shops as well as some restaurants over two levels, a little oasis of life after the relative isolation of the walk. We were definitely grateful for the opportunity to get a drink and then something to eat. I've read since that the area used to be a popular dining spot in the 1970s and is now enjoying a bit of a resurgence. Certainly with the riding stables, holiday chalets (who knew) and outward bound centre that we spotted close by I imagine this is a popular place to satisfy your hunger. Also the views as you dine looking out to sea and towards Malaysia are very pleasant and a welcome change.

Punggol Point and the beach is also an important spot for those interested in history as this was the site of part of the Sook Ching massacre, the extermination of perceived hostile elements among the Chinese in Singapore during the Japanese occupation of Singapore. At this site (one of several) between 300 to 400 Chinese civilians were massacred on the 28 February 1942. These victims were some of the 1000 Chinese men previously detained after a door-to-door search of the Upper Serangoon Road. The Sook Ching massacre took place in various locations, both here and in Malaysia (Malaya as it was then known) between the 18 February and 4 March 1942. This area at Punggol Point has been declared a national heritage site and there is a small plaque acknowledging this piece of the area's history at the site.

After our lunch and with our walk ended we headed home, at least once we managed to secure a taxi. The relative remoteness of the spot (despite the restaurants etc there) means that can be a little challenging. It was, however, great to discover this part of Singapore. I had not realised beforehand that the Punggol Settlement and Punggol Point area was quite so developed with plenty more than just places to eat and drink. I can imagine it's a popular spot for those who live close to the area and even for those living further afield. It seems like somewhere refreshingly different, whether you are visiting with family or looking for somewhere a little more unusual to go to with a loved one (especially with those sea views) though admittedly not the easiest spot to reach (or get back from) if you don't have a car. Hopefully I'll get back there again at some point.

Kadaloor LRT (PE5) is on the Punggol LRT line. It can be accessed via Punggol MRT on the North East line (NE17).

As I mentioned above this walk was another section of the larger North Eastern Riverine Loop, take a look at my previous posts on the Punggol Waterway and the Sengkang Riverside park floating wetland.

If you missed any of my previous Red Dot Roaming posts, check them all out here.