Yet again my husband has been busy and after a rather long hiatus offers up suggestions for a couple more bars in Singapore that you may want to explore.

Awhile ago I asked the Twitter community for bar recommendations for a new #chilloutbars post and got a few responses.  These included 28 Hong Kong Street, shhh, it’s a secret but also pretty wonderful and cool in a 'it’s not really there' kind of way and you have to phone in advance to get a table, Speakeasy (which I've mentioned before) great Saturday only Sri Lankan brunch, but why only Saturday? and Jigger and Pony.

We eventually went to Jigger and Pony one Friday evening.  So the basics, it’s a swanky and swish cocktail bar between the CBD and Chinatown, housed in a shophouse type building on Amoy Street (I always think of Chinese sauces of yore when on this street) serving a range of bespoke cocktails.  They are based around a number of interesting themes, ranging from traditional (and forgotten) to innovative and modern.  I started off with a traditional one, The Churchill (apparently a favourite of the wartime leader from which it takes its name) as this was gin based. The most interesting aspect of this pink-ish / red-ish beverage was the old style glass in which it was served.  It was very olde worlde and reminiscent of a sherry glass that Aunt Mildred used to use in the 1970s.  We had several cocktails that evening and were eventually joined by some friends who were sampling the bar for the first time also, so ended up having several more with them.

Another great feature of the establishment is the happy hour nibbles that are distributed before 7pm, the brushetta was an excellent set-up for the drinking to come.

If you are in the area, also try the bars on Club Street or the fabulous 28 Hong Kong Street. 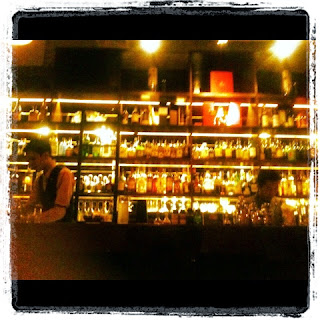 One Saturday lunchtime I was pottering around Gardens by the Bay, playing with my camera, when I decided to have a cooling beverage in the lobby bar of the Marina Bay Sands.  It was here that I had the bright idea of a couple of drinks in Ku De Ta (on the boat looking platform of the three towered gamblers paradise hotel) that evening after the usual author of this blog had finished work.  So, I duly booked a table (in the restaurant as it turned out, not what I wanted) and went home to prepare (well to laze by the pool or whatever, it was a long time ago).

We arrived after dark, and after realising the error in the booking, decided to go to the crowded bar area and attempted to find a stand-up table with a view across the city.  To have a sit down table in the bar area is a ridiculously high minimum spend, $1500 plus, which given there were only two of us we declined.  We ordered a Sauv Blanc and a bottle of beer (Aashi, I believe) and took in the twinkling lights of Singapore from our perch on the top of the hotel. 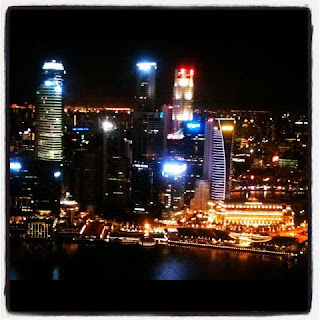 We had a second round of drinks (four drinks were 90 bucks, which is expensive, even for Singapore) and decided to leave in search of some more reasonably priced drinks and food. On the whole the view is spectacular but not really worth the high price of the drinks and there are much better rooftop bars in Singapore (such as Prelude, Orgo, 1-Attitude or Loof) offering very similar views.  If you are in the area also try South Coast, OverEasy or the rooftop bar at Kinki.

I recently visited Bali again and the Ku De Ta there which, I've since learnt, is not linked to the Singapore one.  I shall be sharing my pick of good places in Bali very soon - stay tuned!